The German carrier confirmed plans to deploy A380 aircraft on Asia Pacific services from the Northern Summer 2010 schedule.

However, Lufthansa has no plans to acquire shares Asian carriers, preferring to maintain its commercial partnerships with Thai Airways, Singapore Airlines, Asiana Airlines and Air China. Mr Antinori told Bangkok Post that “we have to be modest. We've got four airlines in Europe that we have to focus on…We are very happy with our partnership with our Asian friends and things are working well”.

Shares in British Airways gained 1.9% yesterday, upon the release of the carrier’s traffic highlights for Nov-2009. BA announced Premium demand on London-New York services is currently “particularly strong”, with Head of Investor Relations, George Stinnes, stating both First and Business class demand on long-haul services is improving internationally, with the US leading the improvement.

Meanwhile, BA stated it does not expect its pension deficit will effect its merger with Iberia. Iberia has the right to back out of the agreement if BA is unable to make a final agreement with the pension’s administration regarding the deficit.

Aer Lingus plans to activate a taskforce immediate effect to commence the process of planning compulsory redundancies and fleet reductions, after concluding it is “too far from bridging the gap with the demands of pilots and cabin crew”. The carrier’s share dipped 0.5% yesterday.

Cabin crew union, IMPACT, responded to Aer Lingus announcement, stating talks are continuing, while SIPTU called for the National Implementation Body to intervene in discussions. Aer Lingus stated further announcements will be made in due course. The carrier had originally planned to cut 676 jobs, but stated earlier in the week that it may make further cuts.

Shares in Finnair led the way down yesterday (-2.4%), as the carrier cancelled approximately 20 services yesterday, affecting approximately 8,000 passengers over the four-day period so far, due to a wildcat strike by ground handling staff.

The carrier, on 30-Nov-2009, announced plans to outsource approximately 490 employees at its ground handling company, Northport, to the Barona Group for its baggage and apron services at Finland's Helsinki Vantaa Airport. In addition, 130 cargo terminal employees were to be transferred to the service of Suomen Transval Oy. 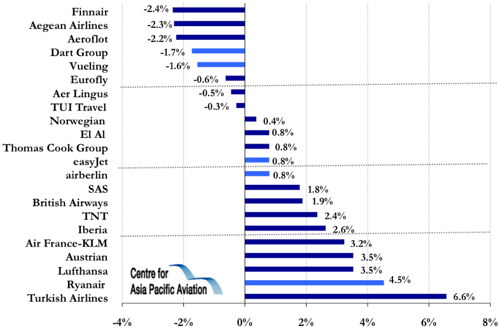