Everyone is talking to everyone it seems. British Airways confirmed it is in talks with Japan Airlines, to help American Airlines and oneworld to defend its alliance with the beleaguered Japanese carrier.

American Airlines, British Airways and members of the oneworld alliance, reportedly plan to jointly submit a proposal to recapitalise JAL and retain JAL as part of the alliance, to fend off the Delta Air Lines-led SkyTeam Alliance bid for the carrier. Delta has reportedly proposed to invest up to USD553.8 million in JAL. JAL is expected to make a decision on an alliance partner by mid-Oct-2009. British Airways’ shares dipped 1.8% on Friday.

Shares in the SAS surged 8.6% on Friday, as Lufthansa stated it expects to reach a “solution” with the Scandinavian carrier by the end of 2009 regarding its 20% stake in bmi. However, Lufthansa, which owns 80% of bmi, has not stated if it plans to acquire SAS’ share. Lufthansa's shares dipped 0.9% on Friday.

SAS Group also announced a 25% cut to Director fees with retroactive effect from 01-Sep-09, as part of its ongoing cost cutting programme. The move is expected to result in total savings of approximately SEK1 million p/a.

Lufthansa plans to cut administrative costs by 15% by the end of 2011. The German carrier’s plans include a 5% cut in personnel costs at its Cologne headquarters and are distinct from a plan announced in Jul-2009 to eliminate 400 administrative positions.

Finnair, also seeking to strengthen its overall group capital structure, issued EUR120 million in domestic hybrid bonds. The coupon rate of the bond is 9.0% p/a and while the bond has no maturity, the company may call the bond after four years. Shares in Finnair were up 2.3% as the bond was oversubscribed.

In other European ownership news, Aer Lingus CEO, Christoph Mueller believes the Irish Government is planning to sell its 25% stake in the carrier, stating the government sees the stake as a “short term” interest. Shares in the Irish carrier rose 1.7% on Friday. 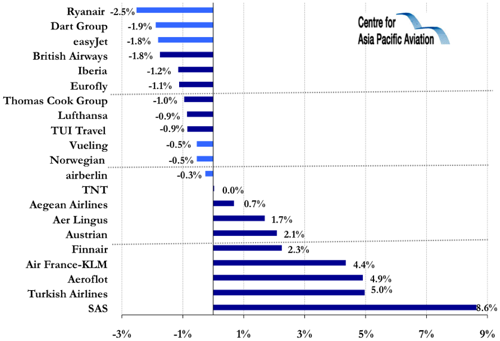