Shares in Lufthansa lost 1.0% yesterday, as the carrier reportedly announced plans to offer slot concessions to secure European Commission (EC) approval for the proposed takeover of Austrian Airlines. Lufthansa is reportedly prepared to give up six of its ten slots between Vienna and Frankfurt to gain approval, so “in principle, everything is still possible,” according to EC Competition Commissioner, Maria Javorova.

Lufthansa has also reportedly applied to the Austrian Takeover Commission to extend a self-imposed 31-Jul-09 deadline for its planned takeover of Austrian Airlines, to give the carrier more time to secure EC approval on the matter. Austrian Airlines shares gained 1.2%.

Shares in British Airways were down 3.4% yesterday, ahead of the release of 1Q2009 financial results, due later this week. CFO, Keith Williams, stated the carrier has reduced its “cash burn” rate to (only) GBP1.4 million per day, down from GBP2.7 million in Feb-2009. Mr Williams cautioned that the current rate of cash burn was not sustainable and could still rise. 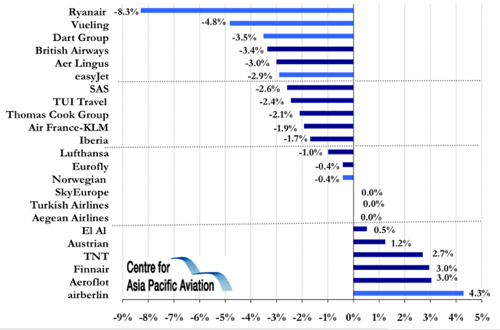