Shares in Lufthansa gained 0.3% on Friday as the carrier announced plans to achieve additional cost savings of EUR1 billion by the end of 2011, as part of continuing cost cutting efforts. The new measures will be detailed and introduced over the coming weeks. Lufthansa will also review the delivery schedule of aircraft orders from 2010.

A spokesman told Dow Jones that the carrier is “not earning enough to cover costs in the present year. Unless market conditions change, our losses will increase significantly in the coming year, owing especially to the rise in fuel prices.”

Austrian Airlines’ shares gained 6.2%, as Lufthansa offered new concessions to address concerns of its proposed takeover of the carrier. While investors welcomed the submission, the European Commission stated it is “too early to say whether the offer from Lufthansa is sufficient of not.”

Elsewhere, British Airways' (BA) shares closed 4.1% higher as it announced plans to raise GBP600 million to improve its liquidity. CEO, Wille Walsh told the Wall Street Journal the move “puts to bed any suggestion that BA is in any sort of risk short term. Relative to competitors, this puts us in a very strong position. BA is taking all of the right action and has taken action ahead of our competitors.” Investors seemed to agree.

BA plans to sell GBP300 million in five-year convertible bonds, due in 2014, which are convertible into approximately 20% of its stock, while BA trustees of its pension fund have agreed to release some bank guarantees, providing further funds for the carrier. 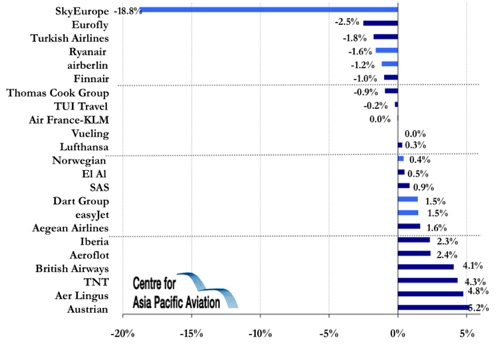