Shares in Lufthansa declined 1.3% yesterday, as Member of the Board, Thierry Antinori, told Handelsblatt that a reduction in demand from leisure passengers may cause a decline in its traffic going forward.

Air France-KLM Director General for Italy, Francis Richard, meanwhile told a parliamentary hearing in Rome that there are "no signs of an early recovery in bookings in the next few months” at a worldwide level. Shares in the carrier rose 0.4% yesterday. Air France-KLM Group is also planning a bond sale. The Group reportedly appointed BNP Paribas SA, Calyon, HSBC Holdings Plc, Natixis and Societe Generale SA to manage the sale.

Elsewhere, shares in British Airways were down 1.0% yesterday. BA CEO, Willie Walsh, stated the carrier does not expect the UK market to commence recovery before mid-2010. Mr Walsh told Reuters, “we have reached the lowest point. Demand has stabilised. But a recovery can not be identified yet. Without a question, we need to become more efficient.” 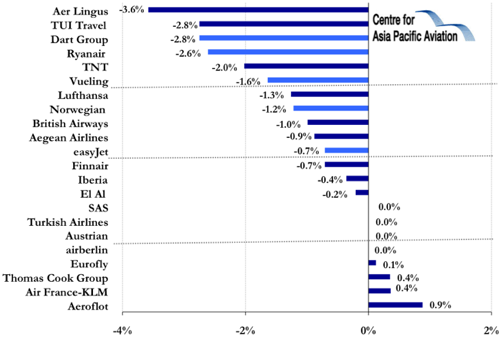