Shares in Lufthansa gained 2.4% yesterday, as the carrier announced the delivery of its first A380 would be delayed by several months to Northern Summer 2010. The German carrier, speaking to Bloomberg, has cited “internal delays at Airbus” as responsible for the pushback.

The carrier had been scheduled to take delivery of the first of 15 A380s in Mar-2010. Airbus and Lufthansa have also agreed on a revised delivery schedule for the A380s.

British Airways would reconsider a combination with Qantas, but no compromise with cabin crew staff

Shares in British Airways closed 0.6% higher yesterday, following comments by CEO, Willie Walsh, stating he would reconsider a combination with Qantas following the recent announcement of the British carrier's plans to merge with Iberia. This was apparently a throw-away line and there appears little prospect of merger talks being revived in the near future. Shares in merger partner Iberia gained 0.9% yesterday.

Meanwhile, Mr Walsh reportedly warned cabin crew staff he has no plans to compromise on cost cutting initiatives, ahead of the staff’s plans to strike in late Dec-2009. According to Mr Walsh, the proposed strike is “very, very different” issues in Jan-2009, in which a deal was made with cabin crew prior to industrial action.

Mr Walsh added, in the Financial Times, that “in 2007 I saw things that I wasn't happy with. I saw there was some merit in the arguments that were being made…I implemented these [cost cutting] changes because I believed it was the right thing for the business to do”. 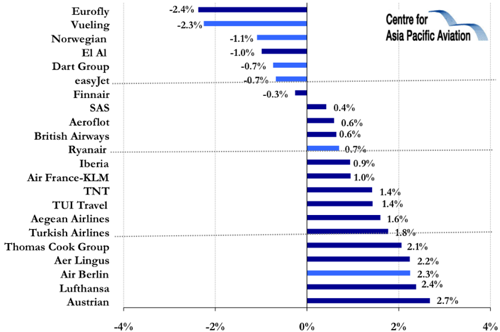