Growth in scheduled airline operations showed continued signs of moderating in Jul-2011, according to the latest statistics from OAG for Jul-2011. LCC growth, however, continued to rise, with LCCs now having a worldwide scheduled capacity share of 25%, with an additional 7.5 million seats in the gloabl LCC network compared with Jul-2010.

The intra-Asia Pacific region maintained its leading position in relation to total seat volumes in Jul-2011. Now just 1 million seats short of the 100 million mark, frequencies and seats within the region both grew by 6% year-on-year for Jul-2011, adding 5.5 million additional seats and 39437 more services. Meanwhile, frequencies and seat capacity to/from Asia Pacific has increased by 11% and 9% respectively. 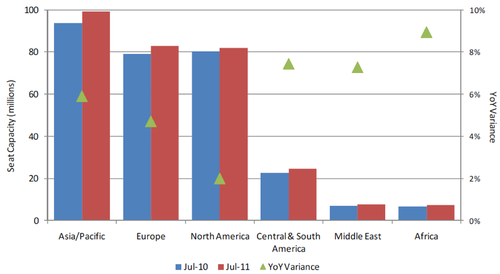 Domestic capacity in China grew by 5% year-on-year and maintains its status as the second largest domestic market in the world, some way ahead of Brazil in third. China’s international capacity has made an even sharper increase, with an additional 1.1 million international seats being added over the past 12 months. 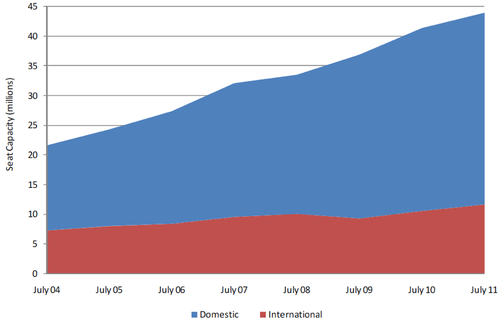 In Jul-2011, carriers in Europe will operate 640,290 flights and offer 82.8 million seats as Europe enters the busy summer holiday period. Scheduled capacity to/from Europe also grew in Jul-2011 with an increase of 5% in the number of flights and offered seats. The majority of the expansion is being driven by LCCs, with a 7% increase in capacity, although traditional carriers have also seen a rise in seat capacity, providing 5% more seats.

Growth between western Europe and the Middle East continues apace, with only London out of the major cities reporting a decline in frequencies (-3%) and seats (-1%). Milan (25%), Rome (10%), Amsterdam (19%) and Madrid (40%) all made large double-digit capacity growth between the two regions. With continued aircraft deliveries scheduled for the main Gulf carriers it can be assumed that growth between Europe as a whole and the Middle East will continue for the foreseeable future.

Seat capacity in Jul-2011 between North America and major hubs in Asia has now reached levels in advance of those seen prior to the Global Financial Crisis. Overall, seat capacity between the two regions grew by 8% with Shanghai being the top performer out of the major hubs, growing by 22% in Jul-2011. 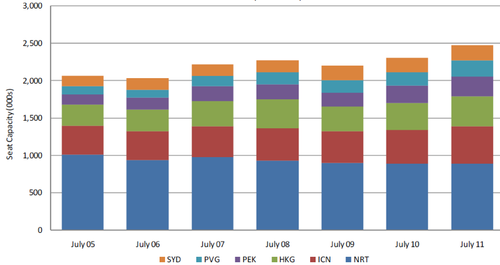 However, total African seat availability in Jul-2011 increased by 4% year-on-year. North Africa continues hold the majority of the market share of capacity. However, this was the first time that it has seen its market share for Jul-2011 decline in recent years. This can be attributed to unrest in this region of Africa. Eastern and Central/Western Africa both saw slight increases in their market share, climbing to 17% and 19% respectively.

Available Seat Capacity to/from and within Africa: Jul-2005 to Jul-2011 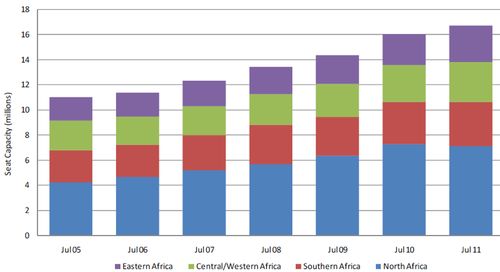 Africa to Paris and Africa to London continue to be the Africa’s most significant intercontinental markets. However, both saw a year-on-year decline in seat availability for Jul-2011, with Paris declining 2% to 694,735, and London falling by 4% to 601,847. Route developments during Jul-2011 include; Senegal Airlines launching four new destinations from Dakar. Cotonou, Douala, Libreville will operate via Abidjan, and a direct service to Praia. After a 21-year absence Egyptair will be resuming services to Iraq with four times weekly service from Cairo to Baghdad and three times weekly Cairo-Erbil service. 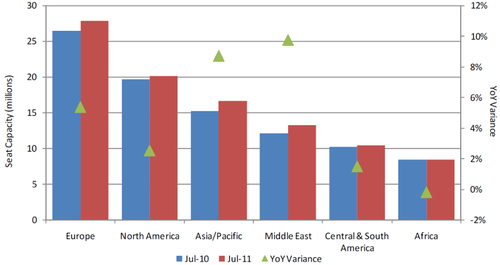 In Jul-2011, LCCs have a worldwide scheduled capacity share of 25%, with an additional 7.5 million seatscompared to Jul-2010. This equates to a year-on-year increase of 9%, which is on par with the growth seen in the 1H2011.

Europe still dominates the LCC market with 31.5 million intra-European seats scheduled in Jul-2011, marking an increase of 2.3 million seats. LCCs now represent nearly 30% of all traffic within and to/from Europe, with LCC seat capacity increasing 7% in the month.

Seat Capacity to/from and within Europe by carrier type: Jul-2002 to Jul-2011 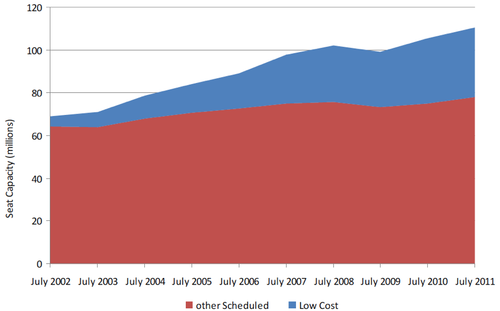 Similar volume growth was experienced by the intra-Asia market. LCC presence within the Asia/Pacific region grew rapidly, increasing capacity by 2.25 million available seats to 18.8 million, for growth of 14%. Low-cost seats to/from the Asia Pacific region witnessed an increase of 21% year-on-year.

Meanwhile, the fastest growing market continues to be intra-Africa which grew 24% for Jul-2011, albeit from a significantly lower base. Frequencies within this market also grew by 35%. 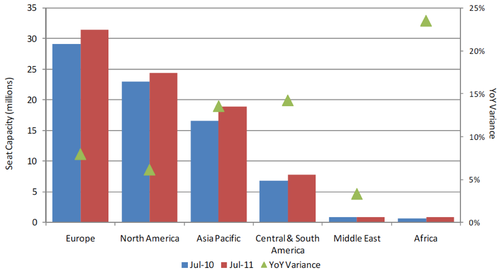 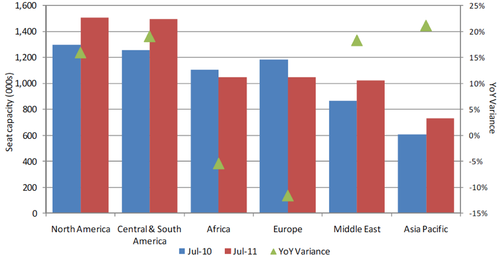 The world’s largest airport, Atlanta, saw a 3% decline in frequencies in Jul-2011. However, this decline was nullified by a 3% increase in actual seat capacity. This is a sign that carriers are opting for larger aircraft, with the average number of seats per aircraft rising from 115 to 122. Despite a 0.3% decline in seat capacity, London Heathrow maintain its position at number three, but Beijing continues to consolidate its number two spot with an increase in available seats of 2% year-on-year.

Delhi continues to be the fastest growing hub in the Asia Pacific with frequencies up 20% and available seats increasing by 22%. However, one spot below on the global table was Hanoi. Hanoi has seen frequencies increase by 28% and seat capacity up 21% in Jul-2011. Hanoi now has a total of 1.33 million seats per month in Jul-2011, up 232,660 on Jul-2010. A significant proportion of that capacity has come from Qatar Airways’ four times weekly Doha to Hanoi service which operates via Bangkok.

OAG also reported some positive news for Tokyo Haneda. Despite seeing a slight drop in overall seat capacity for Jul-2011 compared with Jul-2010, there was a 14% increase in frequencies indicating that airlines are looking to improve schedules, but with smaller aircraft compared with the pre-11-Mar-2011 earthquake period.

In terms of absolute volume, Istanbul Ataturk experienced the largest growth with a rise of close to 1 million seats, a 27% year-on-year increase. Of the top 10 airports, both Los Angeles and Hong Kong reported increases in seat volume of around half a million compared with Jul-2010 levels.