LOT Polish Airlines CEO Sebastian Mikosz said recently that profitability must be developed through passenger retention, expansion of its customer base and the introduction of new options for travel, services and comfort (Future Travel Experience, 20-Jun-2014). Its recent focus has been on the restructuring plan submitted last year to the European Union, involving cuts to capacity and costs.

LOT awaits final approval from the EU for its restructuring plan, which was required in connection with state aid provided by the Polish government in Dec-2012. The airline has said that it will not consider a second tranche of state aid before Sep-2014. It needs EU approval before it can decide its longer term future, including the possibility of seeking new investors, although it has reportedly started to develop a new five year strategic plan. Meanwhile, the privatisation process has gone very quiet.

Mr Mikosz is right to plan for the post restructuring world, but is faced with the need also to continue to make LOT's cost base more competitive against the LCCs that operate the majority of seats in the Polish market.

Route network cut by six destinations over past 12 months

LOT's network is dominated by short-haul destinations, with 71% of its seats on flights of less than two hours and 88% less than four hours. The domestic market accounts for 25% of its seats.

Within the short-haul network, LOT's capacity reduction over the past year has focused on Western Europe, down 26% year on year, while it has grown the number of seats in Eastern/Central Europe by 10% (week of 23-Jun-2014, source: OAG/Innovata). Nevertheless, Western Europe remains its most important region by number of seats. 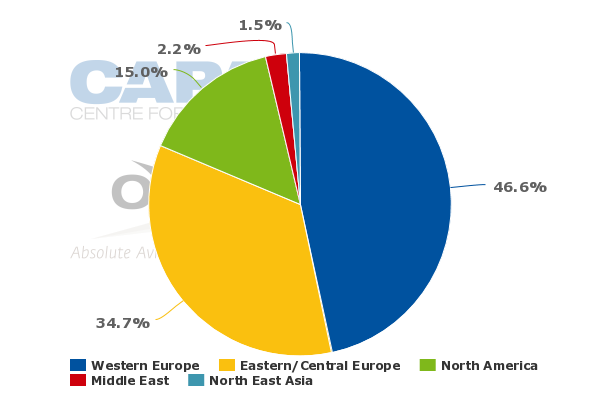 The second largest Polish airline is the regional carrier Eurolot, which has almost quadrupled its seat capacity to Western Europe and more than doubled its capacity to Eastern/Central Europe, including an increase in its domestic capacity of more than 2.5 times.

Eurolot's strategy is to use smaller aircraft on thinner routes, where demand cannot support a Boeing 737, but where frequencies need to be maintained. This logic may be challenged if Ryanair adds to the number of domestic routes where it competes with Eurolot head to head (see below) as the unit costs of the larger aircraft operated by the LCC are much lower.

In total, LOT has cut seat numbers by 5% as a result of its restructuring programme. Eurolot has taken advantage of its competitor's capacity cuts to increase seat numbers by 144% over the past year (comparison for the second week of Jun-2014 versus the same week of Jun-2013), but the regional carrier is still only a little more than 10% of the size of LOT by number of seats. 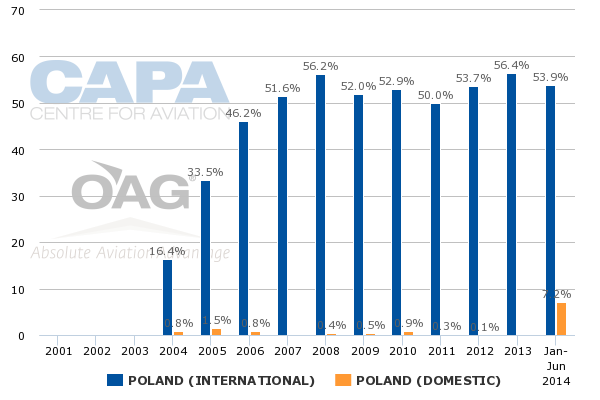 LOT’s main hub is Warsaw Frederic Chopin Airport, where it has a seat market share of 53% and operates almost 20 times the number of seats as its next most important domestic airports (Gdansk, Krakow and Wroclaw, each with a similar number of LOT seats). It no longer operates any routes that do not have Warsaw Chopin at one end of the route.

LOT's list of top 10 international routes by seats includes major European long-haul hubs London Heathrow, Paris CDG and Amsterdam and the hubs of fellow Star Alliance carriers at Brussels and Frankfurt. This reflects LOT's lack of a significant long-haul network of its own. It does have a fairly significant North American network and all three of its destinations on that continent feature in its top 10 international routes. Budapest and Prague are LOT's biggest routes in Central/Eastern Europe. 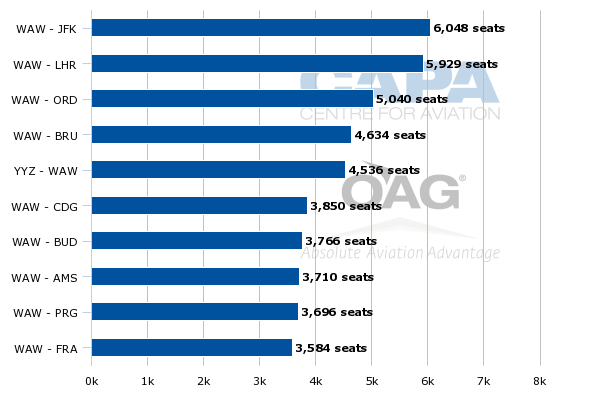 LOT is the monopoly carrier on its three North American routes from Warsaw to New York JFK, Chicago and Toronto. On the key routes in its European international network, its competitive position is more mixed.

LOT is the number one airline by seats on three of the seven European routes in its international top 10 and competes only with codeshare partner and fellow Star member Lufthansa on Warsaw-Frankfurt. However, on two of the three routes where it is number one (Brussels and Budapest), it faces LCC competition on a city pair basis. It also competes with LCCs on the London and Paris routes. Both Ryanair and Wizz Air are competitors on London, Brussels and Paris (again, on a city pair basis). In addition, Norwegian plans to enter the London route in Sep-2014 with a six times weekly 737-800 service from Gatwick, according to data from OAG.

Although not in its list of top 10 international routes by seats, LOT also has a leading position on its fourth long-haul route (in addition to the three North American routes) as the monopoly supplier on Warsaw-Beijing. In addition, it is the only operator on the summer only Warsaw-Beirut service and is the number one airline by seats on Warsaw-Tel Aviv, but faces competition on this route from both El Al and Wizz Air (source: OAG).

Five domestic monopolies out of seven routes, but Ryanair now competes on the other two

On its domestic network, LOT is the number one operator on all seven routes operated and has a monopoly on five of these. However, its competitive position in the domestic market faces a new threat, following Ryanair's entry this summer.

Ryanair is based in Warsaw Modlin, but is now competing with LOT on Warsaw to Gdansk and Wroclaw on a city pair basis. Ryanair will also operate Gdansk-Krakow and Gdansk-Wroclaw, in competition with Eurolot, in the peak summer period this year.

Ryanair deploys 189 seat Boeing 737-800 aircraft on all routes, whereas LOT is operating much smaller Embraer regional jets and De Havilland Dash 8 turboprops on the routes that Ryanair is entering. This gives Ryanair a significant unit cost advantage and, although LOT has a superior schedule in terms of frequencies, this is likely to place heavy downward pressure on LOT's unit revenues on these routes. 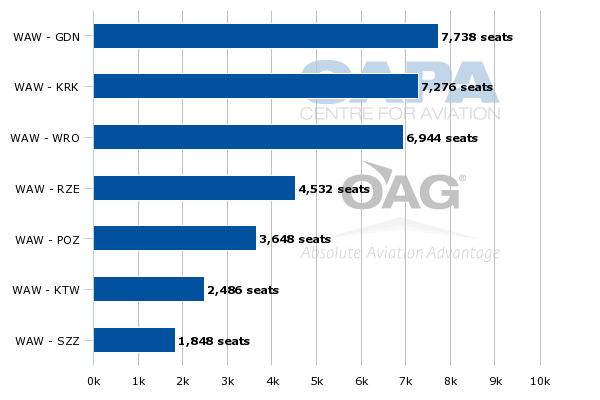 The fleet is smaller by one aircraft than 12 months ago, following the exit of one Boeing 737-500, one Airbus A330, three Boeing 767s and the addition of four Boeing 787s. The most significant development in the fleet has been the increased use of the 787 Dreamliner, which operates all of LOT's four long haul routes.

Regional competitor Eurolot has 11 Bombardier DHC-8Q-402 aircraft (and a further three on order), with an average age of 1.9 years. This compares with a fleet of eight Dash 8s and 12 ATR aircraft one year ago. Eurolot operates under ACMI contracts for LOT on its domestic routes and on two regional international, using five of its Dash 8s. These routes are Warsaw to Gdansk, Katowice, Poznan, Rzeszow, Szczecin, Wroclaw, Riga and Vilnius.

LCCs Ryanair and Wizz Air remain LOT's biggest competitors and are respectively ranked number one and number three by seats in Poland (with LOT at number two), but capacity for both in Poland is down in Jun-2014 versus Jun-2013 (week of 23-Jun-2014, source: OAG).

Ryanair's seat capacity between Warsaw and Western Europe is down 10% year on year for the week of 23-Jun-2014, but is down by approximately 50% for the July to September peak summer season. However, Ryanair is more than tripling its capacity between Poland and Eastern Europe this summer and has also launched domestic Polish routes. This indicates that Poland remains an important market for Ryanair, an airline that is well known for rapidly switching capacity around its extensive network.

Wizz Air's capacity between Poland and Western Europe is down 15% year on year for the week of 23-Jun-2014, but up 5% for the peak summer months. It is down 8% between Poland and Eastern/Central Europe this summer, according to OAG data.

Ryanair and Wizz Air are the two lowest cost airlines in Europe by CASK (cost per available seat km) and will continue to be formidable competitors to LOT, regardless of the short term fluctuations in their capacity growth in Poland.

LOT has not published detailed financial results for a few years, but a reasonable view of the development of its annual passenger numbers and profits can be pieced together from its press releases and other media reports.

It reported an operating loss of PLN4 million (EUR953,000) for 2013, the lowest operating loss for at least six years. It also reported its first net profit in a number of years, at PLN26 million (EUR6.2 million), although no details are available regarding how this was achieved.

LOT said in early Apr-2014 that the operating result was PLN138 million (EUR32.9 million) better than forecast in its restructuring plan. According to some media reports, LOT made an operating loss of PLN200 million (EUR48 million) in 2012 and so the 2013 result was also much better than the previous year. 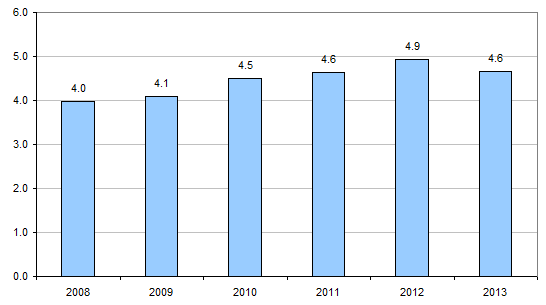 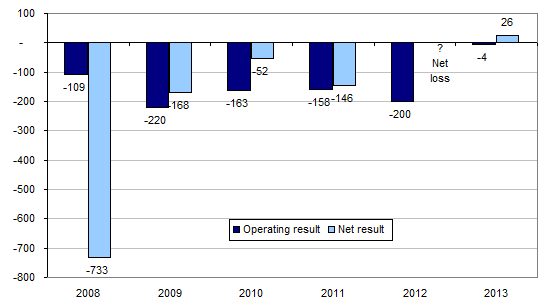 Insufficient data is available to allow the extension of CAPA's previous unit cost and unit revenue analysis of LOT. Its narrowing of operating losses in 2013 suggests that it closed the gap between unit revenues and unit costs, but the operating loss demonstrates that LOT was still unable to generate sufficient revenues for its cost base.

LOT's restructuring programme has involved capacity cuts over the past year, particularly to Western Europe. Its limited long-haul network enjoys some strong market positions, but is small and LOT must continue to rely on codeshare partners, mainly in the Star Alliance, for intercontinental destinations.

On short-haul, which is the most important part of its network, it seems highly likely that its unit costs remain significantly above those of the LCCs with which it competes. Capacity cuts and network pruning may have given support to unit revenues in 2013, although we do not know if this is the case.

Mr Mikosz's product and service initiatives (including the new 'LOT Economy Plus' and 'LOT Economy Simple' fare classes and ancillary services, such as extra luggage, preferred seating, seating upgrades and travel insurance) may give further substance to unit revenues, but unit cost reduction must remain a priority if sustainable profitability is to be achieved.

LOT will then be better placed to attract new investors, facilitating the funding of its long-haul fleet orders and the need to address its ageing narrowbody fleet.