In South Africa, Lonrho's shares (+4.2%) gained again, after the company stated its African businesses are growing. The carrier reported a decline in losses before tax to GBP4.5 million for the 12 months ended 30-Sep-2009, from GBP38.7 million in 2008. Net loss for the year was GBP5.3 million, significantly lower than GBP41.0 million in the previous year.

South African carriers, such as Comair (flat) and 1time (+2.7%), are gearing up ahead of this year’s World Cup. Airports Company South Africa (ACSA) confirmed its airport upgrade programme is 90% complete and with 100 days to complete the works, the programme will be completed in time for the World Cup 2010. The programme, costing USD2.2 billion since 2006, includes the completion of OR Tambo International Airport, the departures level at Cape Town Airport, which is 80% complete. The reconfigured and upgraded access roads, multi-storey parkade and central terminal building will be completed in Mar-2010, whilst the Greenfield King Shaka International Airport will be operational on 01-May-2010. The completion of a terminal expansion at Bloemfontein International Airport and the near completed expansion of East London Airport, as are the terminal upgrades and expansions at Kimberley and Upington airports, whilst a runway refurbishment at Port Elizabeth International Airport is complete.

Meanwhile, in the Middle East, Royal Jordanian Airlines (-0.5%) slipped. The carrier believes 2010 will be a “challenging” year, but it has come a long way since the 1990s, when it spent much of the decade in trouble operationally and financially. In 1999, the carrier commenced a ground-up restructuring. Since then, RJ has undergone one of the most comprehensive and successful turnarounds in the region’s history. 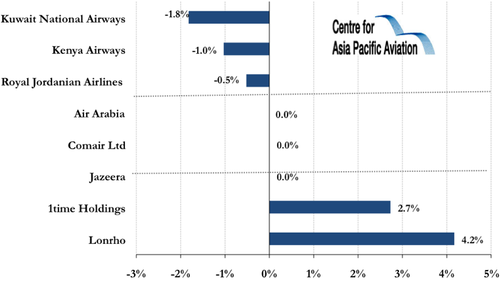