Middle East and African airline shares were mixed on Thursday (20-May-2010) as wider markets continued to fall. In Africa, Kenya Airways continued to gain, as the Nairobi Stock Exchange (+0.6%) soared to a 20-month high.

According to The Africa Report, the NSE 20-Share Index has risen from 3,247 points to 3,553 points since the start of 2010, with foreign investors increasingly looking to invest in eastern Africa’s financial hub. Kenya Airways has been a favourite among investors, due to its high daily turnover.

In the Middle East, Kuwait National Airways (+1.9%) rose despite a 0.2% slip in the Kuwait Stock Exchange. The market decline was the fourth in five days. Royal Jordanian (+0.6%) also gained slightly, as the Amman Stock Exchange (-0.5%) slipped.

Air Arabia (-0.3%) slipped, as the Dubai Financial Market rose 0.4%. The gain came after Dubai World announced during trading that it has reached an in-principle agreement with main creditors to restructure USD23.5 billion in debt. 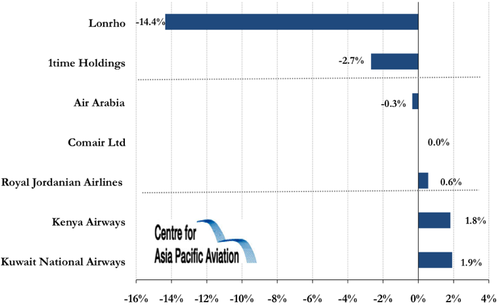