Lonrho (-4%) declined on Tuesday (11-May-2010) following the release of its interim results for the six months ended 31-Mar-2010 after reporting a loss before tax of GBP1.5 million compared with a profit of GBP0.6 million for the same period in 2009. However, Lonrho’s trading profits showed an improvement of GBP0.8 million and its share price also rose by 55.5% in the six-month period since the beginning of the financial year.

On the plus side, Lonrho stated its turnover from operations for the first six months to 31-Mar-2010 increased 23.5% on a comparable currency basis to reach GBP47.3 million.

In other African news, Comair rapidly declined by 10.2% reflecting a decline in the Johannesburg Stock Exchange (-0.53%) while Kenya Airways (0%) remained stable and 1time rose by 1.8%.

Meanwhile, Kuwait Airways (+3.9%) gained following comments from the Kuwait Investment Authority (KIA) Managing Director, Bader M Al-Sa'ad, stating (11-May-2010) it is important for the Kuwait Government to identify the right partner for Kuwait Airways during its privatisation process, as it will be the key to improving the company's performance and bringing a balance to the market.

Royal Jordanian Airlines (-0.6%) declined despite an increase in the Amman Stock Exchange (0.01%) while Jazeera (1.2%) slightly increased. 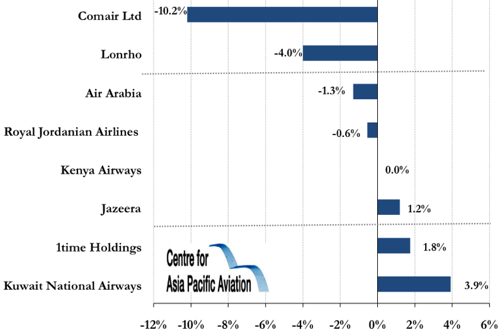