Comair (-1.7%) shares were down yesterday, while Kenya Airways and 1time Holdings were flat. Also in Africa, Lonrho (+8.5%) shares climbed after the company increased its stake in building solutions company, Kwikbuild, to 70%.

In the Middle East, Air Arabia (-1.1%) fell despite the carrier’s Board of Directors proposing a cash dividend of 10% for 2009. This proposal is subject to ratification at the company’s upcoming AGM on 18-Mar-2010. 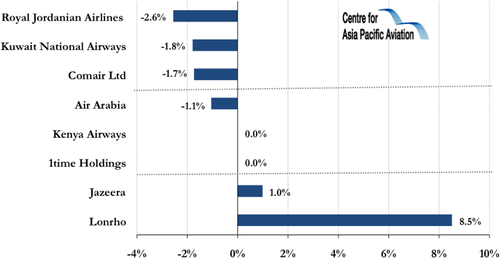