Aeroflot (-3.9%) led European airline shares lower on Friday (10-Dec-2010) on news National Reserve Bank, owned by Russian tycoon Alexander Lebedev, sold a 4% stake in the carrier. Mr Lebedev agreed to sell 44.2 million shares in the airline for approximately USD2.50/share. This was reportedly the minimum price NRB had signalled it would accept and below market levels.

Aeroflot’s shares fell to their lowest level in five months as a result, ending trading at RBR80.71. Earlier in trading, the carrier had fallen as much as 5.8%. Analysts stated the deal showed renewed confidence in the sector.

easyJet was stable for the day after announcing that the resolutions proposed at the company's EGM held today were passed by shareholders. Consequently, the relationship agreement with Sir Stelios Haji-Ioannou and the easyGroup has been terminated, the existing brand licence has been amended and restated on the terms contained within the amended brand licence and the company's articles of association have been amended to remove the rights granted to Sir Stelios and easyGroup relating to board appointments, effective immediately.

Finnair (+0.2%) made a marginal gain after the carrier and Finnish Cabin Crew Union, SLSY, accepted a settlement proposal for a new three-year collective agreement put forth by National Conciliator Esa Lonka. The new collective agreement for Finnair cabin crew is valid through Oct-2013. According to the agreement, the employer cannot lay off employees due to economic or productivity reasons during 2010 and 2011.

Sympathy strikes by other airport workers supporting Finnair cabin crew have also ended. Services were expected to return to normal over the weekend. The strike, which is expected to cost the carrier at least USD20 million, began on 30-Nov-2010 and was over plans to cut rest time between long haul services from 36 hours to 24 hours.

Elsewhere, Lufthansa (+1.2%) also gained, after operations in Germany returned to normal over the weekend, after snow forced the carrier to cancel and delay a number of flights late last week. Dart Group (+1.1%) and Cimber Sterling (+0.9%) were also up for the session. 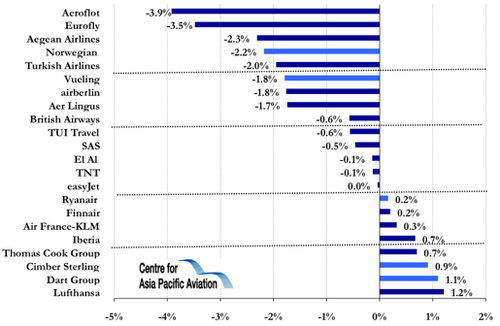