More reports have surfaced regarding Airbus’ concepts for a replacement for its popular A320 family narrowbody. The European manufacturer is reportedly considering a two aircraft solution, a narrowbody AND a widebody - ostensibly driven by the demands of the increasingly important LCC sector.

Manufacturing of the aircraft would reportedly be split between France (narrowbody) and Germany (widebody). An A320 replacement is not expected to enter service until the end of next decade, and Airbus has close to 2,200 A320s on order at the moment. EADS and Boeing both had quiet days, each trading down 0.8%.

Embraer also has some more news on its new aircraft programmes, with the Brazilian company confirming it is in talks with General Electric, Rolls-Royce and Pratt & Whitney regarding next generation engines for a new aircraft. The company is reportedly considering an aircraft to rival Bombardier’s upcoming CSeries, although no formal design work has commenced.

Embraer traded up 1.1% yesterday. The company also commented that it is still suffering from low pick up of aircraft options and delivery postponement requests. The manufacturer added that that it does not see the commercial jet market recovering until late 2010 at the earliest.

Boeing confident on B787 test programme

After reporting a strong 2Q2009 result in early August, with net income of USD14 million in the quarter, Babcock & Brown Air’s share price has tumbled over the past few days, losing 4.9% yesterday to end the day at USD8.15 per share, a one-month low.

Speculation about the future of ILFC has not been helping investor confidence in the leasing market, with Standard & Poor’s noting that ILFC's 'BBB' rating was under review for a possible downgrade. The leasing giant’s parent, AIG, is reportedly reassessing its options for the sale of the unit, which has been on the market for nearly 12 months now.

ILFC CEO, Steven Udvar-Hazy, is reportedly in talks to purchase a part of ILFC’s aircraft portfolio and start a new leasing company. Proceeds from a sale would reportedly be used to pay down AIG's debt obligations tied to its US Government bailout.

Other lessors performed somewhat better, with Genesis Lease and Aercap down 1.3% each, while Aircastle fell 0.8%. 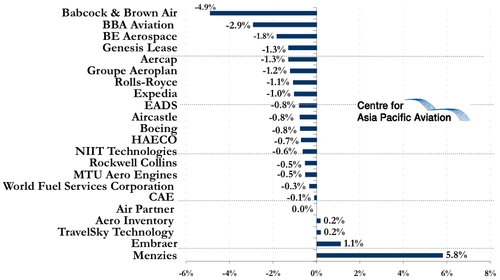