OAG stated the world’s airlines expanded capacity levels for the sixth consecutive month in Feb-2010, with a 5% year-on-year increase in seat capacity and 4% increase in frequencies, led by an 11% increase in seat capacity and frequency by LCCs, which now account for 19% of total worldwide flights (410,833 flights) and 22% of total seats (60.7 million seats). OAG added that in Europe, the Middle East and Africa, there are 210 new routes dominated by LCCs.

Shares in Scandinavian LCC, Norwegian Air Shuttle, soared 13.9% yesterday, as the carrier reported an 8.4% increase in 4Q2009 revenue and a return to profitability on the EBITDAR, EBITDA, EBIT, EBT and net levels. The carrier’s EBITDAR of EUR25.4 million resulted in an 11.7% EBITDAR margin (+14.5 ppts). The carrier also reported a small net profit of slightly under EUR100,000, a turnaround from a loss of EUR17.1 million in the previous corresponding period.

Also in the quarter, the carrier reported yield and unit revenue reductions of 13.4% and 13.7%, respectively, but unit costs were also down, by 21.9% including fuel, and by 7.0% excluding fuel.  Ancillary revenue per passenger increased 21% to EUR9.25.  the carrier increased capacity by 23% in the quarter (and by 18% in the full year), with capacity expected to increase by 30% in 2010.

In the US, shares in Southwest Airlines gained 3.0% yesterday, reaching a new 52-week high at USD12.00 in morning trade, before closing at USD11.88.

In South America, shares in GOL were up 1.8% yesterday, as the carrier’s CEO, Constantino de Oliveira Jr, in an interview with Valor Economico, confirmed that the carrier is planning to acquire nine aircraft from Boeing for approximately USD600 million. An exact timetable for the purchase was not disclosed. 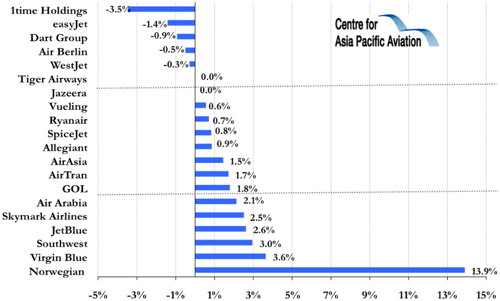