All the major LCC shares were down on Friday (12-Jun-09), with Norwegian Air Shuttle the worst affected, falling 5.0%. The reduction coincides with reports by the governments of Norway and Sweden that the recession in the respective countries is likely to continue for "some time". The two Scandinavian economies are experiencing their deepest economic contractions since World War II.

The Swedish economy is expected to shrink 4.5% in 2009, with the Norwegian economy expected to contract 1%, according to central bank estimates. See related article: Scandinavian yields in a deep freeze.

Also in Europe, easyJet and Ryanair shares both fell 1.8%, while in North America, Southwest shares were down 0.5%. The largest US LCC forecasts no recovery in the near future, expecting year-on-year RASM in Jun-2009 to be lower than May-2009 (-9%), due to the global economic downturn and swine flu outbreak. The LCC added it was unsure whether Jun-2009 revenue would decrease compared to May-2009 on a month-to-month basis. According to Chairman and CEO, Gary Kelly, "it's a very, very difficult time, and earnings are going to be very stressed until the economy changes", adding, "the green shoots [in the economy] are pale green at best".

Among the Asia Pacific/Middle East LCCs, Jazeera Airways' shares were down 3.6%, with AirAsia shares slipping 3.3%, while Air Arabia and Virgin Blue reported increases of 3.7% and 6.4%, respectively. Virgin Blue's increase occurred despite reports that it subsidiary, Pacific Blue, is expected to post a loss in 2009, with Macquarie Equities stating it is likely the carrier could exit the New Zealand domestic market within the next 18 months. The carrier's new long-haul offshoot, V Australia, is also likely to report a loss in 2009. 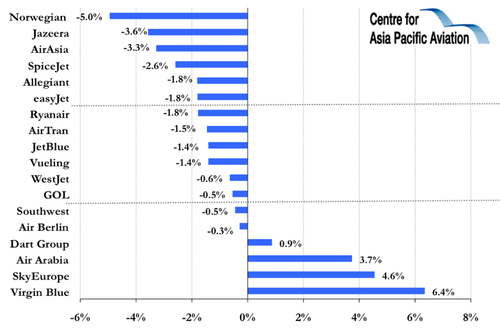