Low cost carrier (LCC) shares came under pressure around the world yesterday, as global stock markets plunged. The oil price (the major cost item for many LCCs) was highly volatile yesterday, gaining 2% early on the New York Mercantile Exchange before plunging 8% by early afternoon to USD64.24 per barrel and settling 2% lower at USD68.01 for Jun-2010 delivery.

Oil prices have fallen in 12 of 14 trading days this month on growing fears for the global economic outlook and steadily building crude oil supplies. With oil denominated in US dollars, the falling value of the euro has also undercut demand for crude oil. 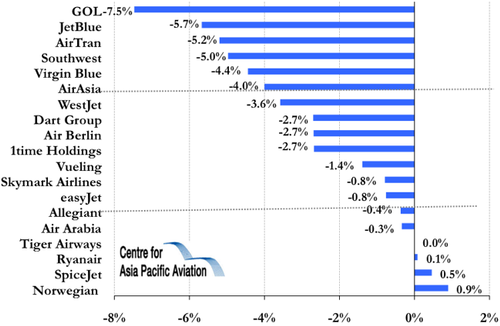 Oil below USD70 per barrel

The price of oil had been relatively steady between late February and early May this year, trading in a range of USD80 to USD85 per barrel. The recent drop in oil prices is the largest shift in prices since oil jumped USD13 per barrel in late Dec-2009. 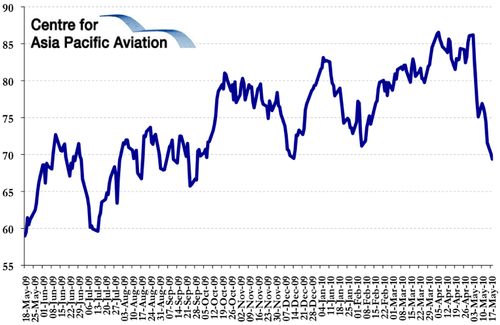 While consumption in large developing markets (particularly China and India) is expected to increase, European and North American demand has not recovered to the extent expected. US crude oil supplies reported their fifth consecutive weekly increase, adding another 200,000 barrels.

However, the US oil inventory report had some bright spots this week. The increase in crude suppliers was much lower than forecast, while distillate stocks declined by 1 million barrels, against a forecast 1.3 million barrel increase.

Globally, oil demand is expected to be 86.4 million barrels per day, just 1.9% higher than in 2009. The International Energy Agency recently revised its oil forecast downward. Global oil output has also been climbing, although OPEC has suggested that the recent USD15 per barrel slump in world oil prices is linked to economic uncertainty and not oil any excess in supply. US refinery capacity dropped 0.5% to 87.9% of capacity in mid-May-2010.

OPEC stated earlier in the year that it was satisfied crude oil prices at USD75-85 per barrel.

Jet fuel prices are also falling back to around USD200-210 cents per gallon. New York, US Gulf Coast and Los Angeles prices all gave up more than 6% this week, with Gulf Coast prices dipping below the 200 cent barrier. Amsterdam exchange prices dropped 6.7%, while Singapore prices recorded the smallest fall, down 3.7% to USD205.6 cents per barrel. Despite the declines, prices are still more than a third higher in the year-on-year comparison. 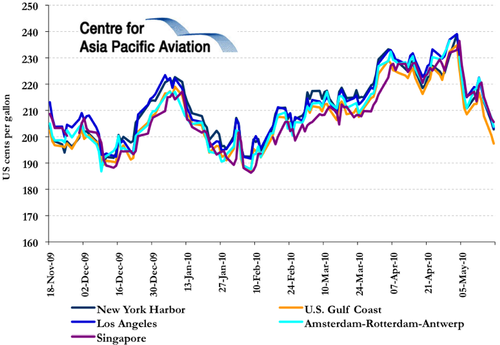