Latin American markets down; TAM, LAN and GOL all decline for the session

TAM (-1.7%) declined as Latin American markets fell for Tuesday (16-Oct-2010) despite the carrier announcing a massive improvement in net income, up 224.0% year-on-year to BRL740 million (USD426.8 million), for the three months ended 30-Sep-2010. Operating profit also improved, rising to USD405.5 million, compared with a loss of USD55.7 million in the previous corresponding period.

The carrier now expects a 22-25% year-on-year rise in passenger traffic (RPKs) for FY2010, on a 12% increase in capacity. The revised outlook is due to a stronger-than-expected 25% rise in demand in the domestic market from Jan-2010 to Oct-2010. As a result, load factor is expected to reach 69% for the year. Costs per ASK excluding fuel are expected to decline 6.0%.

Also in Latin America, LAN Airlines (-2.1%) fell to its lowest intraday price in almost four weeks after Morgan Stanley cut its rating of the carrier’s stock from "overweight" to "equalweight". The analysts stated the move was due to limited potential upside.

Morgan Stanley analysts Nicolai Sebrell and Augusto Ensiki stated that while LAN is expected to continue to grow, this “growth is already price in the stock, as LAN is the most expensive airline among the global peers we track”. It also attributed concerns over LAN’s merger with TAM as another reason for the downgrade, stating “cross-border mergers between entities with different cultures, regulators, systems and business practices are likely to present unforeseen challenges”.

GOL (-1.0%) also fell after Raymond James and Associates Inc cut its rating of the LCC’s stock from "outperform" to "market perform". The analysts stated the cut was due to GOL failing to reach its expectations for its 3Q2010 financial results. 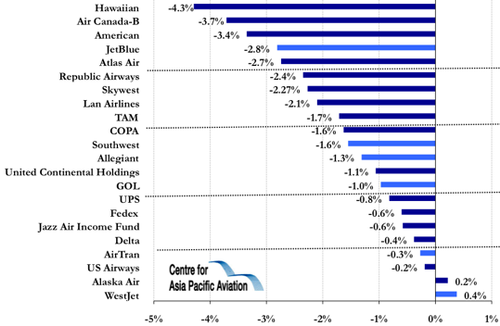