Brazil's Finance Ministry Price Administration and Competition Bureau stated it is likely to support the merger of TAM and LAN Airlines and submit a favourable report on the competition aspects, according to a report in the Wall Street Journal. The merger still needs to pass scrutiny from the Brazilian antitrust board. Chilean competition authorities are also reviewing the merger. The merged carrier would be the largest airline in Latin America and the 15th largest in the world. Shares in LAN were up 4.3%, while TAM shares gained 5.3%.

Shares in Air Canada declined 4.6% yesterday, against generally better Canadian markets. Uncertainty over the carrier’s outlook has resulted in RBC Capital Markets reducing its target for the carrier’s one-year share price by CAD1 to CAD4 and lower its outlook from outperform to sector perform (both with speculative risk). National Bank Financial has cut its estimate for the carrier’s shares by CAD0.50 cents to CAD6. The cuts are due to higher fuel costs. Canadian carriers are expected to follow the example of US carriers and raise fares to compensate for the increase in oil prices.

Shares in American Airlines were up 2.1% yesterday. American won a temporary reprieve in its battle with online travel agency Orbitz this week, with a district court in Texas issuing a temporary order preventing Sabre from downgrading  American’s listing in flight searches. Despite this, UBS has downgraded the carrier to from “buy” to “neutral”. UBS applauded the carrier’s efforts to cut distribution costs with online travel agencies, but believes it could affect near-term profits. 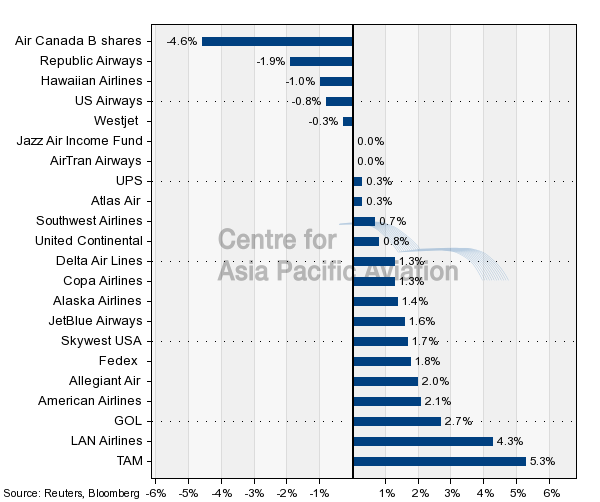