LAN announced it expects its takeover of TAM to be finalised by Mar-2012, depending on the resolution of regulatory issues. LAN CEO Enrique Cueto originally expected to conclude the merger by the end of 2011 but investigations by the Chilean antitrust authority are not expected to be finished until late 2011 or early 2012.

Shares in LAN were flat in trading yesterday, while TAM shares eased 0.6%.

United Continental Holdings reported the following traffic highlights for May-2011:

United and Continental's May-2011 combined consolidated and mainline passenger revenue per available seat mile (PRASM) each increased an estimated 14-15.0% year-on-year.

US’ Air Line Pilots Association union formally asked the National Mediation Board to schedule an election that would give 2300 non-union JetBlue pilots the chance to choose ALPA representation. JetBlue, an entirely non-union discount carrier, has so far evaded organsing efforts among its ground workers and pilots. Efforts by an independent union to organise JetBlue’s pilots in 2009 fell short when only 33% of the eligible voters cast ballots. Since then, the NMB has changed the rules, allowing unions to be formed if a majority of votes are cast in their favour. JetBlue CEO Dave Barger stated earlier this week that pilot unionisation would completely change the carrier’s business model. 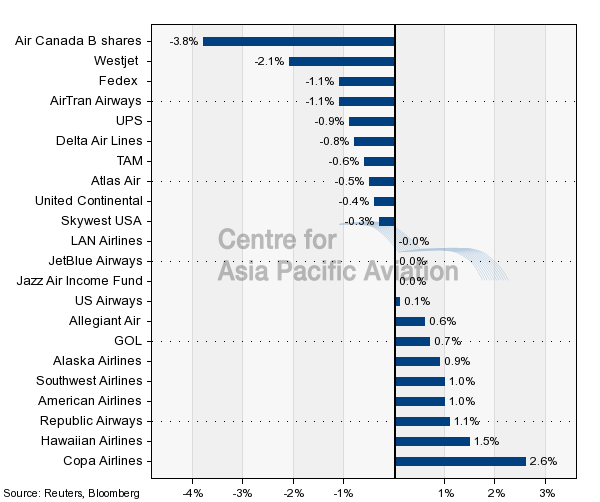