The majority of North and South American carriers saw stock prices rise again on Monday (09-Nov-2009), with the AMEX Airline Index up 2.1% at the end of trading as a result. Stock prices rose with the wider market, with the Dow up 2%, despite a gain in oil prices (+2.4%), to USD79.28.

Domestic traffic in Chile, Argentina, Peru and Ecuador rose 14.1% as capacity increased 8.6%. As a consequence, the domestic load factor for the month increased 3.8 ppts, to 79.1%.

GOL (+4.2%) stocks were upgraded during trading to ‘Neutral’ by JP Morgan, citing the carrier’s modification of its fare structure, including an increase in “walk-up” fares, signalling the end of its price war with domestic competitors. The carrier also reported a USD45.8 million net profit for 3Q2009, following the end of trading.

The analysts also downgraded TAM (+3.7%) stocks to ‘Underweight’, as it is not as exposed to the increased fares. JP Morgan added it believes the carrier’s stock price has climbed too high.

The Air Transport Association of America (ATA), stated during trading that it expects a 4% year-on-year decrease in the number of passengers travelling on US carriers during the 2009 Thanksgiving holiday season (20-Nov-2009 to 01-Dec-2009), despite deep discounting over the past several months.

ATA President and CEO, James C. May stated, "it is increasingly apparent that the economic head winds facing the airlines and their customers are anything but behind us. The recent announcement that US unemployment surpassed 10% highlights one of the key factors impacting consumer buying decisions,"

As typical with the Thanksgiving holiday travel period, flights are likely to be quite full, driven this year by the decrease in available seats and deep discounting, rather than by robust demand. Carriers have cut back their schedules in response to economic pressures, with 2009 capacity reductions the deepest since 1942. In addition, recently released government data show that average domestic airfares in 2Q2009 fell to their lowest level since 1998, dropping 13% year-on-year - the largest year-on-year decline on record. 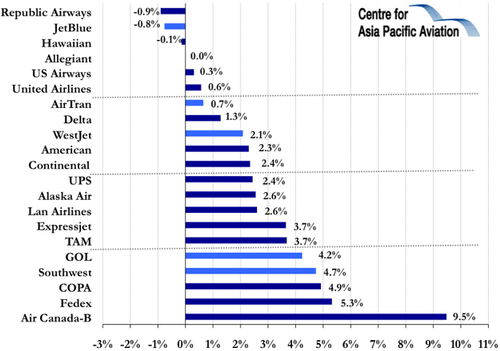