LAN Airlines and TAM soar, despite mixed responses from analysts

LAN Airlines (+2.2%) reached a 52-week high of USD30.50 for the day, with approximately 1.7 million shares changing hands during the session.

However, Fitch described the merger deal is “positive”, stating it is a “good opportunity for the carriers to grow and take advantage of commercial, financial, and operational synergies”.

Other ratings for LAN made during trading are as follows:

TAM bonds meanwhile took their biggest gain since being issued in Oct-2008.

Elsewhere, GOL (+1.1%) took its biggest intra-day tumble since 06-May-2010 on news of the merger, before making a comeback in afternoon trading. The merger provides somewhat of a challenge for GOL, as LAN will now be looking to grow in Brazil. 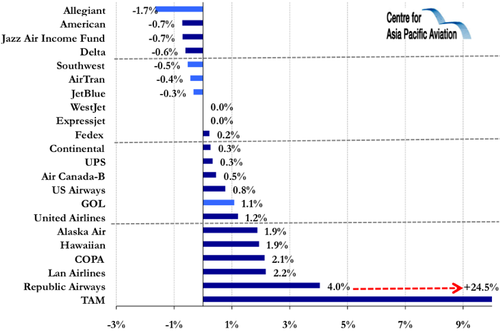