Kuwait Airways to lease, delay orders, as neighbours take 50 widebodies each year in 2013 and 2014

Kuwait Airways is saddled with one of the oldest and least efficient fleets in the Middle East, but the carrier is reportedly considering postponing its long awaited fleet order with Airbus, in favour of a deal involving short-term aircraft leases. The option to postpone the long-term solution may be the best avenue for the debt-laden carrier to accelerate replacement of its badly ageing aircraft, while sidestepping the political interference that has dogged previous acquisition plans.

Meanwhile, neighbouring Middle East airlines will add more than 50 widebody aircraft this year and another 50 in 2014, as carriers in the region continue to expand their fleets with high-capacity, long-range aircraft to fill out their globe-spanning networks. At the same time, they are dictating the options for other airlines in the region.

More than half of the aircraft scheduled to be delivered to the region over the next five years are widebody aircraft, including large numbers of next generation aircraft types such as the 787 and A350.

The Airbus deal had appeared to be secure. In May-2013, Kuwait Airways chairman Sami al-Nisf announced the carrier had signed a ‘letter of acceptance” with Airbus for 25 aircraft.

The carrier also confirmed that it was involved in discussions with local and international banks to cover some of the financing requirements. Earlier this year, Kuwait Airways received a major financial windfall, when the governments of Kuwait and Iraq concluded a USD500 million compensation agreement over damages due to Kuwait Airways from the 1990/1991 Gulf War.

The airline also had more than USD1.5 billion in debts generated between 2004 and 2012, settled by the Kuwaiti Government as part of preparations to privatise the airline. The government will also contribute to financing the carrier’s new fleet.

In addition to the fleet order, Kuwait Airways agreed to lease up to 22 Airbus aircraft while it awaited deliveries. The carrier was reportedly interested in 10 A330s and 10 A230s and two A321s. Deliveries were to have commenced in 2015, comprising five used A230s and five used A330s, the latter possibly sourced from Jet Airways. The remainder of the aircraft were to be delivered new from leasing companies over 2015.

Kuwait Airways' board has now reportedly separated out the leasing and purchasing segments of the fleet renewal strategy. The board favours concentrating on closing lease deals for 20 aircraft by Apr-2014. The board is open to leasing aircraft from different manufacturers, although Airbus aircraft are reportedly to be given priority.

The average age of its aircraft is just under 20 years. Outside of Iran, which is subject to an import ban on western aircraft, this gives the carrier the oldest fleet in the Middle East.

While regional and local rivals have brought in new narrowbodies and next-generation widebodies with modern cabins and the latest in-flight features, Kuwait Airways finds itself with a fleet that imposes a heavy burden in terms of fuel efficiency, maintenance, reliability, availability and manning requirements.

The age of the fleet is such that the carrier has been forced to issue public reassurances about maintenance and safety, after a number of highly public incidents involving aircraft reliability issues, including the grounding of a third of its fleet for more than a month. 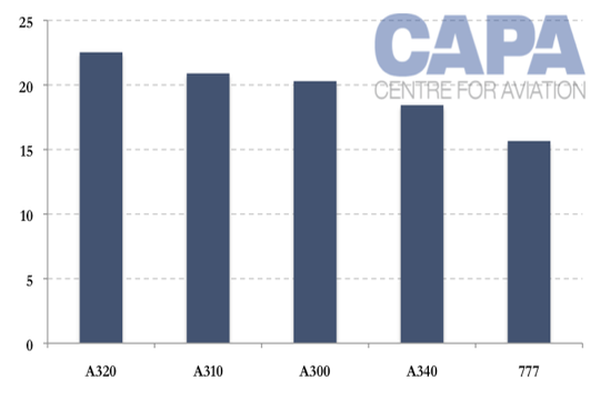 Kuwait Airways has been trying for years to put a sorely needed fleet deal in place, however its economic situation and local politics have frustrated its ambitions. A 19 aircraft deal with Kuwaiti leasing company ALAFCO – of which Kuwait Airways owns 11% – was halted in 2007 by the Kuwaiti parliament. Another deal was halted in 2009 and a moratorium was temporarily put in place on any aircraft deal until the carrier’s privatisation process was completed, although this appears to have been abandoned.

Short-term leases may just be the best option for the carrier before it moves to a permanent fleet renewal. Leasing aircraft, even aircraft that are not brand new, will help relieve the burden imposed on Kuwait Airways by its badly ageing fleet. It also gives the carrier a flexibility to tailor its operations to the conditions in the Kuwaiti market, which has been suffering from overcapacity, thanks to its open skies agreement.

The airline initially wants to take 11 of its existing fleet from service, leaving its younger 777s and A340s in place and getting rid of A320s, A300s and A310s, most of which are more than 20 years old. Eventually, the carrier’s long-haul widebody aircraft will also need to be replaced. Even if the Airbus agreement goes ahead as originally specified, the carrier’s 777-200s will be more than 20 years old and its A340-300s will be approaching 25.

Privatisation of Kuwait Airways may become a reality at last

Going on in the background of these deliberations is the long-running saga of privatisation of the carrier. In mid-2013 the Kuwaiti parliament gave its final approval to the privatisation bill, although it included several amendments. One of these has the Kuwait Government retain a golden share in the carrier, granting it veto power on major actions and strategic decisions by the airline. Another gives the carrier’s 2,600 employees the option of retiring, transfer to another government entity or retaining their position at a privatised carrier.

Under the privatisation bill, 35% of Kuwait Airways' shares will be sold off to a local or foreign strategic investor once the carrier has become profitable. 50% will be sold to Kuwaiti citizens via a public offering. The Kuwait Government will retain a 10% strategic shareholding and the remaining 5% will be held by the employees' share ownership fund.

Meanwhile, any moves being made by the carrier must keep alive its prospects. Kuwait Airways has emerged from a programme to solve its operational and structural issues, but it remains an unattractive investment prospect.

The carrier’s privatisation committee is now offering “attractive rights and benefits”, including exemption from custom tariffs and fees on spare parts, guaranteed government contracts, fuel discounts and a five-year monopoly to provide ground handling at Kuwait International Airport, to any investor brave enough.

Meanwhile Kuwait's neighbours are surging ahead, dictating strategy for other airlines, with 50 new widebodies delivering each year

A lot has happened in the region's aviation market since once-strong Kuwait Airways' future was curtailed by the Iraqi invasion – most notably the rise of the UAE carriers. This leaves the airline, like a number of others in the region, with few options for network planning.

Middle East airlines will add more than 50 widebody aircraft this year and another 50 in 2014, as carriers in the region continue to expand their fleets with high-capacity, long-range aircraft to fill out their globe-spanning networks.

More than half of the aircraft scheduled to be delivered to the region over the next five years are widebody aircraft, including large numbers of next generation aircraft types such as the 787 and A350.

Airlines in the region have already added 30 widebody aircraft so far this year, including five A380s and the region’s first three 787s, which have gone to Qatar Airways. The long-haul Boeing 777-300ER, which is able to carry more than 300 passengers from the Gulf states to the US west coast, remains the mainstay of the region. Nearly 20 have been delivered this year, joining the more than 200 of the type already in service.

According to the CAPA Fleet Database, there are another 25 widebody aircraft left to be delivered before the end of 2013. This includes another six A380s, all of which are due to go to Emirates.

The Dubai-based carrier is the world’s largest A380 operator and still the sole carrier from the Middle East to fly the type. This long-enjoyed exclusivity will be ended early next year, when Qatar Airways takes delivery of its first A380, with a three-class, 517-seat configuration and the carrier’s new first class product.

The Middle East is the only region globally where the widebody aircraft assume numerical dominance. The orders for the 777 and 787 are stronger than that of the 737. There are more carriers awaiting new A350s than are awaiting the A320neo.

In all, widebodies account for two thirds of the almost 700 aircraft on order in the region.

Airbus is the region’s manufacturer of choice. The European manufacturer accounts for about 45% of aircraft in service with Middle Eastern carriers, as well as roughly 60% of the orders for new aircraft. Much of its success is due to the A320, which has become the preferred short-haul aircraft for Middle Eastern customers, outselling the 737 by roughly 3:1. This sales success has carried over into the next generation narrowbody aircraft market, with the A320neo pulling in 127 orders in the region, against none for the 737 MAX.

The CSeries is yet to break into the region, despite the ongoing will they/won't they drama between Qatar Airways and Bombardier over the aircraft.

Boeing’s position in the widebody market is better, with the aforementioned popularity of the 777 with the Gulf’s sixth freedom hub carriers. Even here though, Airbus has the advantage. Airbus has outstanding orders for 10 A330s, 73 A380s and 179 A350s. Against this, there are still 90 current generation 777s to be delivered to carriers and 116 787s on order in the Middle East.

Boeing’s new widebody offerings – the 777X and the 787-10 – may help redress some of the imbalance in the next few years, although Airbus is ranging the A350-1000 against them. The US manufacturer has particularly strong hopes for the success of the 777X in the Middle East, confident that the aircraft’s combination of very long range and seating for 350 to 400 passengers will prove a winner in the region.

It is also working with Emirates, the world’s largest 777 operator, to develop the next generation of the family. With the replacement cycle for Emirates' 777s due to commence around 2017, Boeing is hopeful that the Middle East’s carriers will repeat history.

There may be new orders to come at the Dubai Airshow next month.....

With the airlines of the Gulf states dominating order books in the region – airlines in the UAE and Qatar account for three quarters of the region’s aircraft orders – there are still more opportunities for large widebody orders in the region. Emirates, Etihad Airways and Qatar Airways have orders for more than 320 widebody aircraft between them, but Airbus and Boeing are fiercely competing for future orders from these carriers.

The aircraft manufacturers are getting ready for the Nov-2013 Dubai Airshow. The 2011 event saw deals for more than 160 aircraft – mostly A320neos – but this year the battle for ordering is likely to fall on the widebody end of the spectrum.