After years of speculation and failed attempts to revamp its fleet, Kuwait Airways has now signed two major fleet agreements in the past 12 months. The deals mark what will hopefully be a new era for the carrier, which has been among the heaviest loss making carriers in the Middle East, reporting net losses almost every year in the past two decades.

The Feb-2014 Airbus order was for the carrier’s first new aircraft in nearly 20 years. 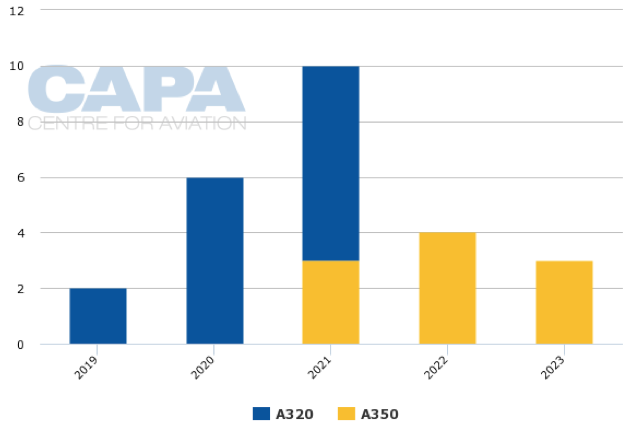 With its A350s not due for delivery until early next decade, the 777-300ERs will fill a long-haul capacity gap for Kuwait Airways. The first 777 deliveries are due to will occur from Nov-2016, according to Kuwait Airways chairwoman and managing director Rasha al-Roumi.

New aircraft mark a fresh start for Kuwait Airways, as its elderly fleet is replaced

In the interim, Kuwait Airways also agreed in early 2014 to lease another 12 aircraft – seven A320s and five A330s – from Airbus. Initial deliveries of these aircraft are due to being in early 2015 and will be completed by the end of the year. This would be the biggest ever influx of capacity for the airline.

The new aircraft are desperately needed by Kuwait Airways. The carrier compares poorly with both local LCC competitor Jazeera Airways, which dominates the local short-haul and regional tourism markets, and the big Gulf carriers, which funnel long-haul traffic to/from Kuwait via connecting services through their own hubs.

Kuwait Airways has a variety of obsolete narrowbodies and widedbodies in its fleet, the oldest of any carrier in the Gulf region. Its A320s, A300s and A310s are all on the wrong side of 20, with expensive maintenance commitments. Kuwait Airways has repeatedly been forced to ground these types temporarily  for technical reasons, without sufficient spare capacity to maintain its schedule.

The four-engine A340-300s are slightly younger, but are fuel inefficient compared to newer types and are approaching retirement ages – which are typically below 25 years for the type. Kuwait Airways has four in service.

Its two Boeing 777-200ERs are the youngest aircraft in its fleet, by some margin. Yet, if they are not replaced before 2020, they will be around better than 22 years old at retirement, older than the carrier’s A300s and A340s are at present. 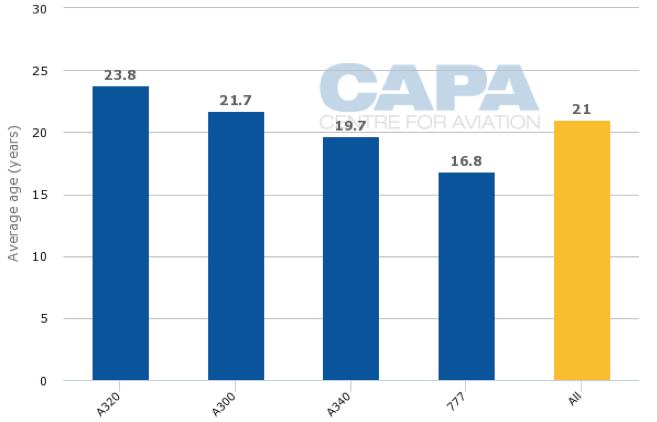 Boeing already has open production slots for the 777-300ER in 2016. Getting these 777s into Kuwait Airways fleet would be a strong positive for the airline. They will easily replace the aging Airbus widebodies, allowing it to retire older aircraft while simultaneously cutting costs and providing a healthy boost to capacity.

The A350-900s which will follow the 777-300ERs into service offer similar range and passenger capabilities to the Boeing 777-200ERs already in service. The aircraft is suited to many of the longer and thinner routes that Kuwait Airways serves in its role as Kuwaiti national carrier.

Given the capacity jump between the carrier’s existing widebody types and the 777-300ERs, a smaller aircraft such as the 787-8/-9 or Airbus A330neo may have been more appropriate. However, with next generation aircraft slots scarce and Boeing’s need to sell around 300 current-generation 777s by 2020 to bridge its production gap to the 777X, the combination of price and availability appears to have proved attractive enough.

Kuwait International Airport as it stands at the movement is ill-suited to handling transfer traffic from an aircraft the size of the 777-300ER. The 777-300ER is physically larger than the A350-900, and has capacity for an around an extra 80 passengers in a typical three-class configuration. However, Kuwait has major plans to upgrade its sole airport, having recently concluded a USD4.8 billion development contract with a Kuwaiti-Turkish consortium.

Kuwait Airways desperately needs the soon to arrive Airbus aircraft and the follow on Airbus and Boeing orders to revamp its fleet and allow it to offer a product that is at least comparable to its Gulf-region peers.

The airline is unlikely ever to revive its status as a major player in the Middle East market – the region's aviation has changed far too much over the past 15 years that Kuwait Airways has been in limbo for it to aspire to anything more than effectively serving its home market. However, the airline still has an important role to play in linking Kuwait with the wider world, and its new fleet will go a long way to help it achieve that goal. This will make it more valuable as a partner and it is in this respect that Kuwait Airways' future may look brightest.