Kuwait International Airport (KIA) reported record traffic levels for 2008, with a 5% increase in passenger traffic, an 8% increase in aircraft movements and a 2% increase in air freight year-on-year. The result reflects the growing number of airlines that expanded operations to the airport as a result of rising demand and Kuwait’s open skies policy. 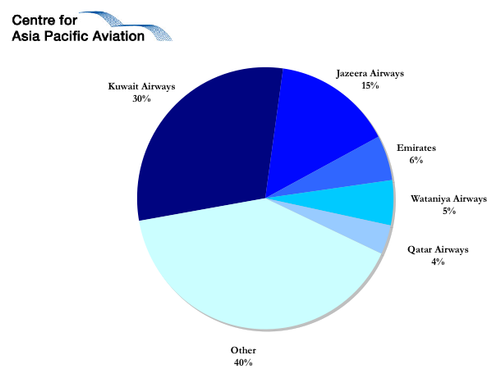 Kuwait could weather the global economic downturn better than most. Several new routes have been launched in recent months, as demand has held up quite well. The introduction of a third carrier in Kuwait, Wataniya Airways in Jan-2009, should help to ensure local competition remains intense.

An inauguration ceremony was meanwhile held for the premium travel terminal, Sheik Saad General Aviation Terminal, on 10-Mar-09. The terminal is located next to Kuwait International Airport and is the first of its kind in the country.

The building was completed in May-2008, and is fully equipped to handle all types of private and commercial aircraft. It cost an estimated USD55.4 million, covering an area of 130,000sqm. Royal Aviation Company, a subsidiary of Kuwait National Airways, manages the new terminal.

Kuwait National Airways also owns Wataniya Airways, the first commercial carrier to operate from the terminal. There are currently only a handful of private and business charters also operating from the terminal.

Mubarak Al Mascati, the chairman of Royal Aviation stated, "the aim of establishing the Sheikh Saad General Aviation Terminal is to elevate the level of service in the aviation sector in Kuwait and deliver in accordance with internationally-adopted requirements of quality." Terminal services include valet, concierge and extended hospitality, parking, immigration and security and lounges with wireless Internet access.