Kunming Wujiaba International Airport (KMG), the gateway to Southwest China's Yunnan Province, was the seventh busiest airport in China in 2010. However, a growth rate of (just) 6.6% made it the slowest growing among China's 12 largest airports. Amid rising demand and capacity constraints, Kunming is nearing completion on a USD3.6 billion replacement, Kunming Changshui International Airport, which is scheduled to be operational in early 2012 and become the fourth largest aviation hub in China. Currently China’s largest airport construction project, Changshui is aimed at developing Kunming as an economic area and key transportation hub for the region to Southeast Asia. Upon opening, Kunming Xiaoshan International Airport will be equipped with two 4000m runways and a 400,000sqm terminal capable of handling up to 27 million passengers p/a, with this capacity expected to double within five years.

Kunming is one of several fast-growing airports in western China to have outlined ambitious growth plans. Chengdu, Xi'an, Chongqing, Wuhan and Chongqing are all vying for the role as the nation’s fourth largest aviation hub (after Beijing, Shanghai and Guangzhou). In coming months, CAPA will continue to review the progress and ambitions of Chongqing's rivals in western China. At present, Chengdu Airport, which has already been reviewed by CAPA as part of this airport series, is the largest of the ambitious western China airports. However, Chongqing, which has also been reviewed, together with Xi’an, have reported the fastest growth rates recently, according to CAPA's Airport Traffic Benchmark Tool.

Kunming Airport, operated by Yunnan Airport Group and one of the oldest airports in China, handled 20.2 million passengers in 2010. It was also the seventh busiest airport in China in terms of cargo traffic and the eighth largest in terms of aircraft movements. The airport is, however, showing signs of stress, due to its low water table, the age of the terminal and congestion at its sole 3400m x 45m runway. The airport is constricted due to its proximity from downtown Kunming (just 4km).

Airports in China with more than 10 million passenger numbers p/a: 2010 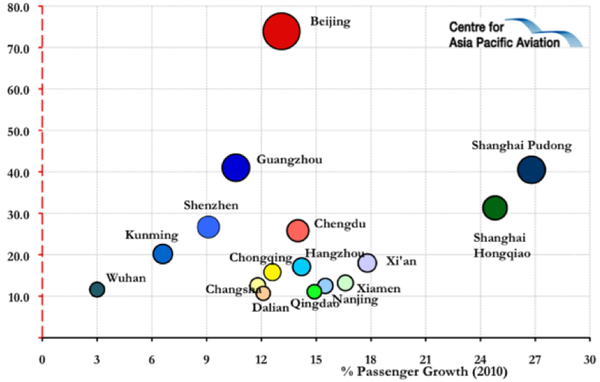 In line with the region's strong economic growth, traffic at Kunming Airport has grown rapidly in recent years, and has held the position as the seventh largest carrier by passenger numbers since at least 2005. Passenger volumes have more than doubled at Kunming over the past seven years, increasing over threefold over the past decade. 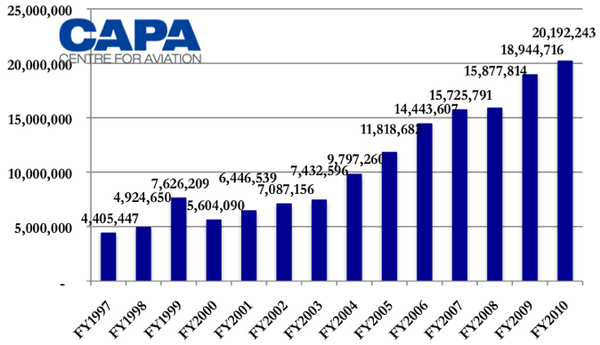 However, based on current capacity (seats) data for China, Kunming (with 562,500 system seats per week) has slipped to eighth largest, having been overtaken by Xian, with 589,242 weekly seats. The airport also ranks eighth in terms of domestic seats but 10th in terms of international seats.

Due to the fast expansion of the metropolitan area and limited land availability, the local government and airport authority will move all operations to the new Kunming Changshui International in early 2012. The new airport, being constructed at a cost of CNY23.09 billion (USD3.6 billion), will be the fourth largest in the country after Beijing, Shanghai Pudong and Guangzhou and will have four runways.

The airport is located 21km east of the city covering an area of 2297sqm within a 160sqkm airport economic zone. The airport is linked to Kunming by a new highway, and a light rail network link is also under construction. All operations will be transferred to the new airport by Jan-2012, and the old airport (Wujiaba) will be demolished.

Upon opening, the airport will have two 4000m runways and a partially solar powered 400,000sqm terminal capable of handling up to 27 million passengers p/a. The project forms part of the construction objectives of the 11th year plan. The main terminal, designed by architectural firm SOM with engineering firm Arup, with cover 548,300sqm to be the second largest terminal building in China. 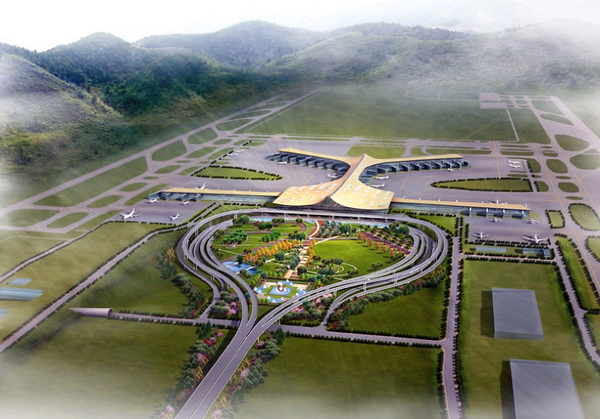 Dublin Airport Authority (DAA) subsidiary Aer Rianta International (ARI) has signed a six-year contract with Yunnan Airport Group in China to operate 650sqm of retail space when the new airport opens. In its first move into China, the retailer will run 11 separate duty-paid stores selling branded skincare products, perfume and cosmetics, fashions items, accessories and other goods. DAA has signed a strategic collaboration agreement with the Yunnan Airport Group, which operates 11 airports in southwest China, saying it hopes the deal to operate outlets at Kunming Changshui will be the first of many partnerships between the two airport authorities.

Kunming has ambitious growth plans and the geography and economic growth to support this. The city of Kunming, the capital and largest city of Yunnan Province in Southwest China, benefits from its position near the border with Southeastern Asian countries, serving as a transportation hub in Southwest China. In recent years, Kunming's transport links to Southeast Asia and elsewhere, predominantly through its air links, have been steadily expanding, with direct services existing to all major Chinese cities, most major Southeast Asian cities and some major cities in Japan and South Korea. Kunming, which has a population of 4.8 million people, is the only major city in Yunnan province, and has been designated a special tourism centre and as such has a proliferation of high-rise buildings and luxury hotels.

Against this backdrop, Kunming is, like its peer airports, well placed to continue to serve as one of the nation's – and Asia's – largest airports. Its ambition to become China's fourth biggest hub will, however, face some strong competition from other powerhouse cities in the nation's broad and fast growing interior.

Domestic services for 94% of weekly scheduled seat capacity and 91.7% of scheduled ASKs. China Eastern Airlines is the dominant carrier at Kunming, with a 42% capacity (seats) share, followed by China Southern Airlines with a much lower 1.4% capacity share and Lucky Air with a 1.0% seat share. 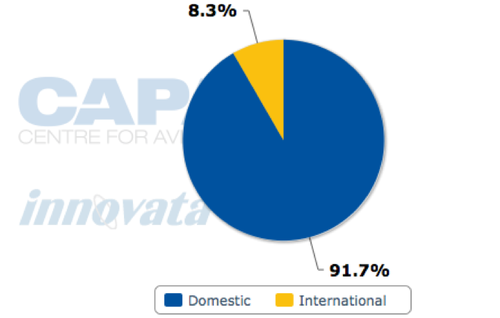 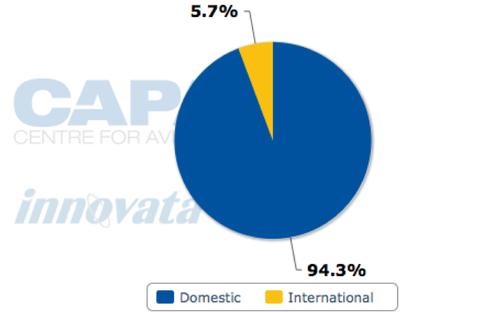 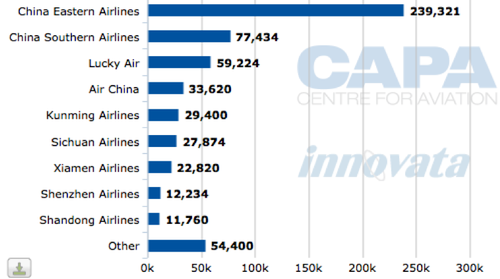 International services are operated to 18 destinations in Asia Pacific and one in the Middle East, with Hong Kong the largest international market with 6706 weekly seats, followed by Bangkok (5032) and Singapore (2974). There are no direct services from Europe to Europe, the Americas or Africa. 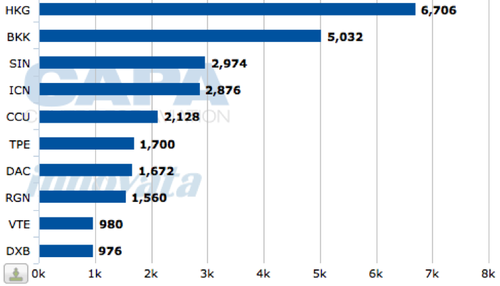