Kulula fights back at 1time, Royal Jordanian and Air Arabia up, Comair down

Lonrho (-4.1%), 1time (-3.5%) and Comair (-1.3%) shares all dropped on Thursday (11-Feb-2010). South Africa’s FTSE/JSE Africa All Share Index (-0.1%) fell for a second consecutive day, pushed down by a fall in mining stocks, after the European Union declined to provide details of plans to assist Greece with its sovereign debt issues.

Elsewhere in Africa, Kenya Airways (+3.1%) made its largest gain since 19-Jan-2010, after IATA certified the safety of the carrier’s ground-handling operations.

In the Middle East, Royal Jordanian (+4.1%) made the biggest gain of the day, while Air Arabia was also up.

Jazeera and Kuwait National Airways were flat, as the Kuwait Stock Exchange Index (+0.1%) was virtually unchanged. 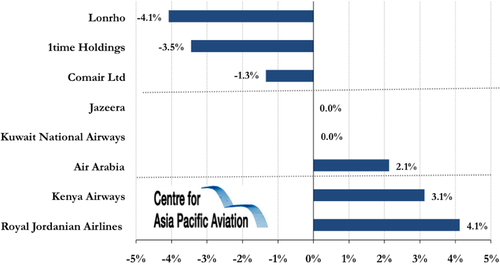