Korean Air's shares advanced 2.8% on Friday as the carrier unveiled a more than doubling in operating profits, to establish a new second quarter profit record, as revenues surged 36.7% year-on-year.

The carrier attributed the result to improvements in its air freight business in the second quarter as exports of liquid crystal displays, semiconductors and cellphones rose. Korean Air added the “continuous recovery of South Korea's outbound traffic and strengthening of the Korean won against major currencies will boost the per-passenger revenue further up in the third quarter.”

Emirates to deploy A380 to KL earlier – report

The only Asia Pacific airline not to rise on Friday was Malaysia Airlines, which eased 0.5%. Emirates is considering deploying A380 equipment on the Dubai-Kuala Lumpur sector possibly by early 2011, in response to rising demand. Emirates Country Manager for Malaysia, Kavin Martinus, told The Star newspaper, “It would be sooner than later, but it depends on passenger growth.” Emirates operates three times daily B777 service to Kuala Lumpur, as well as daily to Melbourne via KL.

Malaysia Airlines is not scheduled to receive A380 equipment until 2012 at the earliest. 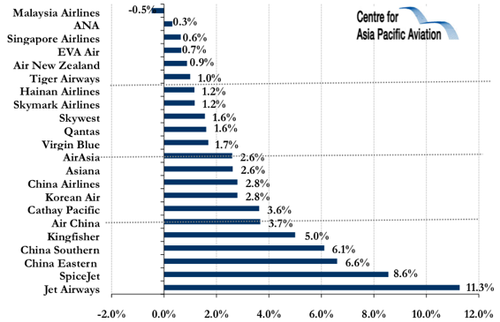