EVA Air (-3.1%) and China Airlines (-2.0%) dropped back, despite an agreement between Taiwan’s Civil Aeronautics Administration and the CAAC to increase cross-Strait frequencies with an additional 72 weekly flights from 05-Jul-2010. China Airlines will add 14 weekly frequencies on services to Beijing (to daily), Guangzhou (daily), Shenzhen (daily), Ningbo and Nanjing while the privately-owned Transasia Airways will add two weekly frequencies on the Taipei Songshan-Fuzhou and Kaohsiung-Fuzhou routes, respectively.

Hainan Airlines eased 0.6% as it released its traffic figures for May-2010, handling 1.6 million passengers in the month, up just 1.9% year-on-year. 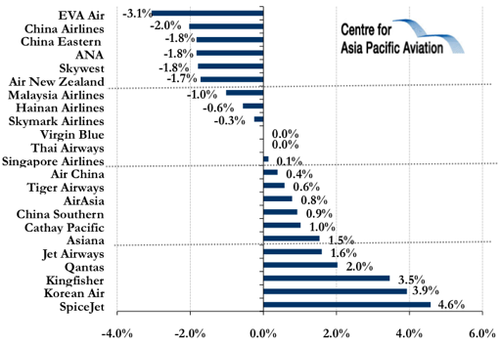