Air China (-1.1% yesterday) similarly stated advance bookings for Sep-2009 and Oct-2009 have revealed an improvement in demand in Japan, Europe and US, although it remains too early to tell whether international demand has bottomed out. Demand in the South Korean market, however, remains weak.

Air China’s parent, China National Aviation Holding Co, meanwhile disclosed it may sell its HKD467 million (USD60 million) stake in China Eastern Airlines to focus on developing its own presence in Shanghai. As part of this, Air China and Cathay Pacific have announced plans to establish an air cargo JV venture in Shanghai by the end of 2010 to enable the carriers to better compete with the merged China Eastern/Shanghai Airlines. China Eastern’s shares were 0.8% lower yesterday, with Cathay Pacific down 1.8%.

Meanwhile, Air New Zealand slipped 1.6%, after yesterday reporting its largest earnings reduction since 2002 in FY2009. The carrier stated it believes it is well positioned to survive the global financial downturn, and sees signs of demand stabilisation. However, yields remain under significant pressure and fuel prices have resumed an upward trend, meaning it is unlikely it will achieve the same level of net hedging gains in FY2010 and will have to continue to respond. See separate report: Air New Zealand faces revenue crunch

Qantas slipped yesterday, down 2.2%. The carrier today stated it needs time to assess the impact of the sixth delay to the delivery schedule of the B787 overnight, with CEO, Alan Joyce, stating ”this is frustrating news but not unexpected. We now need to assess exactly what this means for our initial B787-9 deliveries and will know more in the next few months". See separate report: When no bad news is good news: Boeing announces details of B787 schedule

In other Qantas Group news, the carrier has increased its stake in Jetstar Pacific from 18% to 27%, as part of its agreement with State Capital Investment Corporation, and will further increase this stake to 30% by 2010.

Malaysia Airlines' shares, meanwhile, gained 3.0% yesterday. The carrier is expected to appoint a new CEO today, following the departure of Idris Jala, with CFO, Azmil Zaharuddin, generally expected to be appointed to the position. 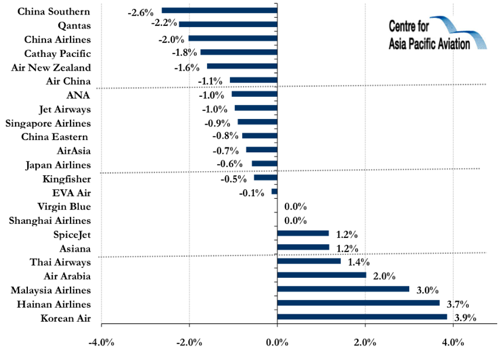