Kingfisher Airlines shares slumped 7.2% to INR65.3, the most since 27-Jan-2010. The Board of Directors of approved a plan to convert debt of as much as INR13.55 billion into equity.

Jet Airways’ shares also declined heavily on Friday, slumping 6.7%. Civil Aviation Minister Praful Patel has warned airlines against a sudden increase in air fares. SpiceJet shares were 0.6% weaker. Shares of Jet Airways and SpiceJet Ltd have risen by over 40% since the beginning of the year thanks to improved fundamentals of the sector.

Shares in AirAsia advanced 2.4% to MYR2.61, its highest close since 22-Oct-2010. AirAsia last week revealed strong third-quarter results with third quarter net profit more than double in the quarter on the back of higher operating revenue and improved yields.

Qantas Airways resumed A380 service for the first time since an engine explosion on 27-Nov-2010 and the aircraft departed Sydney for London with CEO Alan Joyce on board. The fleet of six A380s has been grounded since 04-Nov-2010. Shares in the carrier were unchanged on Friday at AUD2.67 but have declined 7% since the incident compared with a 26% reduction in the benchmark S&P/ASX 200 index 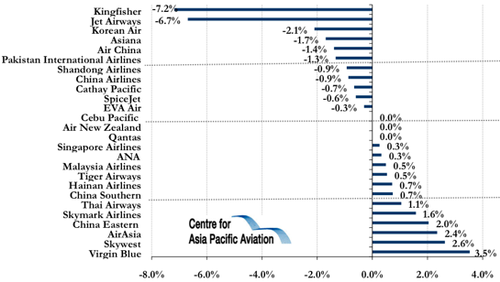