Kenyan Airways up on improved trading in Kenya; Air Arabia down

The Kenya Shilling (KES) also rose to its highest level in one month against the US Dollar, following rumours of improved earnings by the country’s companies. The currency is expected to continue to rise. According to Bloomberg, Nairobi-based independent stock market analyst, Aly Khan Satchu, stated investors are starting to reweigh their portfolios in favour of Africa.

In the Middle East, Air Arabia was down 1.1% at the end of trading, while Kuwait's Jazeera rose 2.2%. 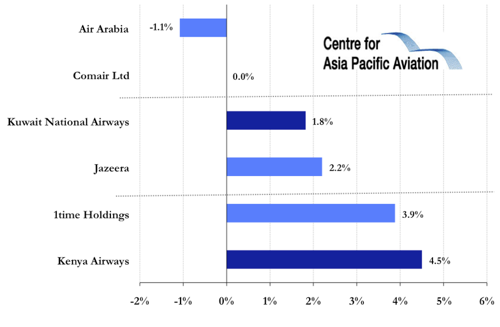