The eight-year exclusivity deal, which was signed in 2002, aimed to boost the carrier's financial performance and its privatisation plans. Under its provisions, other Jordanian airline companies were only permitted to operate charter flights during the exclusivity period. Royal Wings and Royal Falcons are currently the only firms licensed to operate scheduled services in Jordan. Jordan's Chief of Civil Aviation Regulatory Commission (CARC), Suleiman Obeidat, stated the annullment aims to encourage the carrier to rectify its operational and administrative conditions, to keep in pace with aviation liberalisation and to attract foreign investment.

Elsewhere in the Middle East, Kuwait National Airways (+3.6%) made the largest gain of the day, moving with the wider market, with Kuwait’s All-Share Index (+0.4%) making a modest gain for the week. Jazeera Airways (-1.0%) and Air Arabia (-1.1%) were both down.

Kenya Airways up with improved traffic 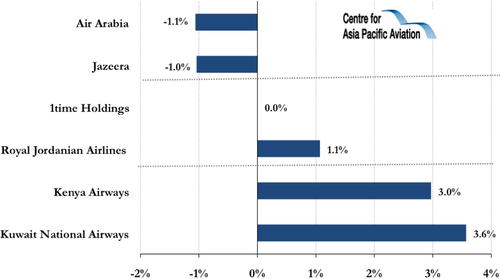