Kenya Airways to deploy B777; Kuwait Airways to borrow from local banks to pay salaries

Kenya Airways (+1.1%) shares slightly rose on Friday (13-Aug-2010), on the same day the carrier announced plans to deploy B777 widebody aircraft on China service. The B777 will be configured with 28 business and 294 economy-class seats for services departing Guangzhou and Hong Kong from 01-Oct-2010, a 50% increase in capacity.

Soon-to-be-listed Kuwait Airways stated it would borrow from local banks to pay employee salaries, with company spokesman, Adel Boresly, stating: "We got the approval of the cabinet to borrow from local banks to support the company's cash flow including payment of salaries." No details on the financing amount were provided, although it has been reported the carrier required USD208 million in liquidity. 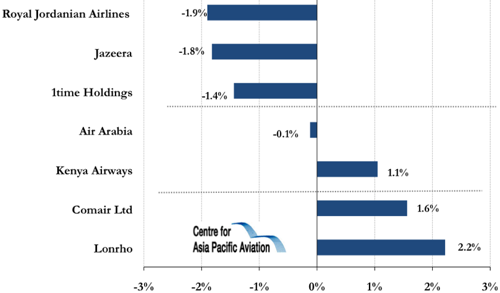