Kenya Airways (-2.2%) shares dropped for the second day. The carrier also stated it is seeking assistance from the Central Organisation of Trade Unions (Cotu) to assist the Aviation and Allied Workers Union's (AAWU) demand for USD4 million (KES325 million) in allowances that the carrier has rejected on grounds it would have a negative impact on profit margins.

Kenya Airways CEO Titus Naikuni stated: “I have asked the Cotu secretary- general, Mr Francis Atwoli, who has been part of deliberations that have involved the airline management, AAWU national office and FKE to intervene by urging the Union not to deviate from the process that was agreed upon by all parties on the 24-Sep-2010.”

Air Arabia (+0.4%) has partnered with visa processing agency IVS Global to provide online visas to its UAE-bound business and leisure travellers from India. The airline also announced the launch of a call centre in India to facilitate ticket bookings on its Indian services. Head of Commercial Mr AK Nizaar stated: “We are in discussions with the Indian Government to enhance frequency as well as add some more destinations,” with the carrier aiming to increase frequencies from metros as well as adding more tier two and three cities to its network. 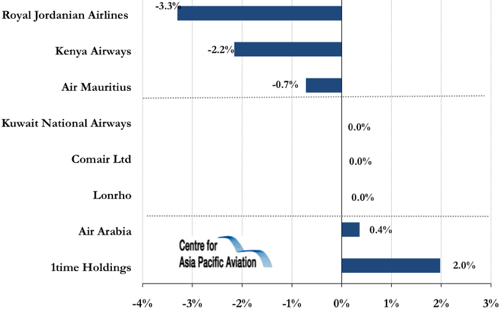