Kenya Airways recorded (13-Oct-2010) an on-time performance (OTP) of 86% for its morning flights departing from Nairobi. CEO Dr Titus Naikuni stated: “All the 38 flights that have operated were fully crewed and no member of staff is absent from work today due to the strike action.”

The airline is set for conciliatory talks at the Labour Ministry on 13-Oct-2010, and management is hopeful an agreement will be reached.

Meanwhile, Kenya’s All-Share Index retreated 0.4% to 81.23 by the 15:00 close in Nairobi while Kenya Airways’ shares advanced the most in more than two months. 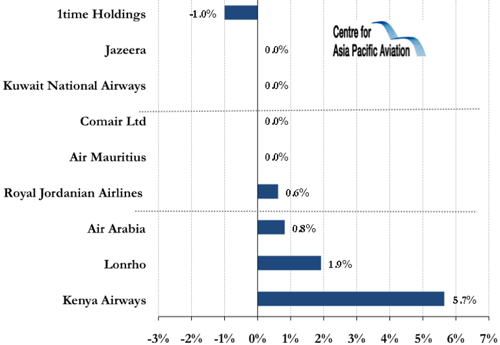