Kenya Airways (-1.0%) slipped for the day, despite the Nairobi All Share Index gaining 0.3%. CEO, Titus Naikuni, stated over the weekend that the carrier plans to resume service to Rome, as economic recovery occurs in the region.

Mr Naikuni also confirmed the recent ash cloud stoppage of services to Europe will have an impact on the carrier's annual financial performance, although no further details were disclosed. The carrier is also in talks with Airbus regarding the purchase of A330 equipment, to support the carrier's expansion until it receives B787 equipment. A final decision is expected in 2H2010.

Elsewhere in Africa, Comair and 1time were flat for the day, while Lonrho (+2.1%) was the day’s only gainer. The group last week acquired a 51% stake in Oceanfresh Seafoods Pty Ltd, a Mozambique and South Africa based seafood supplier, with a GBP336,860 investment.

In the Middle East, Jazeera Airways (-1.6%) fell and Kuwait National Airways was flat as the Kuwait Stock Exchange (-1.3%) hit a 16 month low, as regional investors remained concerned as to the strength of the global economic recovery. 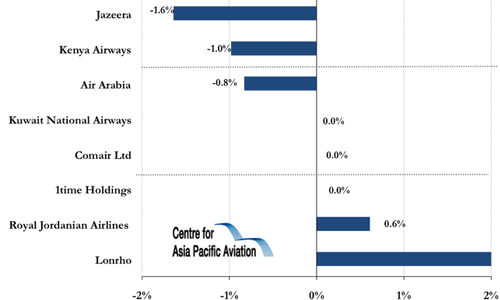