Kenya Airways (+0.6%) will increase the frequency of services to Mombasa with 10 daily services from 05-Nov-2010 using two B737-300 aircraft. Fares on the route have been reduced to USD99 (KES7999) inclusive of all taxes. The carrier has plans to operate to Malindi early Dec-2010.

The Kenyan Government raised its economic growth forecast for this year as investor confidence rises thanks to a new constitution and the global economic recovery, according to President Mwai Kibaki. He stated the economy will expand 5% this year and 6% in 2011. This compares with forecasts of 4.5% and 5.7% given by Finance Minister Uhuru Kenyatta in Jun-2010.

Fly540, subsidiary of Lonrho (0%), recently launched daily return Wilson Airport-Amboseli, Nanyuki and Samburu services aimed at reducing the time needed for passengers to drive to and from the airport and streamline check-in and departure. 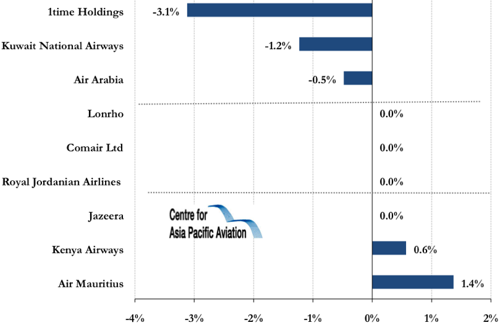