Kenya Airways gains on opening of European airspace; Jazeera up; Lonrho down

The majority of Middle East and African carriers' shares were up on Wednesday (21-Apr-2010) as markets were boosted by the reopening of European airspace.

Kenya Airways (+1.8%) has also been forced to cancel flights over the period. The carrier's shares gained after being able to resume Nairobi-London Heathrow service on 21-Apr-2010. Details on how much the carrier has been affected by the Ash Attack are yet to be released. Effects on other carriers in Africa and the Middle East are as follows:

Elsewhere, Jazeera Airways (+4.6%) made the biggest gain on the day, despite the Kuwait Stock Exchange remaining flat. Lonrho (-3.6%) took the biggest fall. 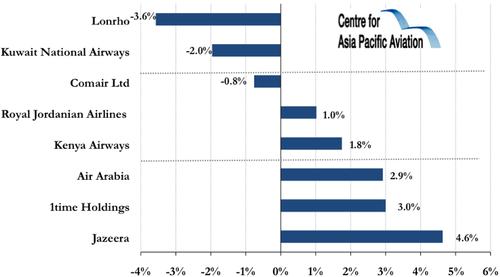