The majority of Middle East and African carriers’ shares were down on Wednesday (19-May-2010) as they followed global markets lower on Germany’s announcement of a ban on naked short-selling of particular financial instruments. The fall in airline shares was despite another 1.2% decline in oil prices, to USD69.87.

Lonrho (-2.5%) declined, despite a 12.5% climb the day prior, on news it has taken full ownership of African food supplier, Rollex.

Kenya Airways (+3.8%) was the only gainer of the day, and one of the day’s most active gainers on the Nairobi Stock Exchange (NSE), which gained 1.0 points for the session. Independent analyst, Aly Khan Satchu, stated the market is expected to gain this week on banks’ 1Q2010 earnings.

In the Middle East, Royal Jordanian (-1.1%) fell with the Amman Stock Exchange (-0.7%). Air Arabia (-1.0%) was also down, while Jazeera and Kuwait National Airways were stable. 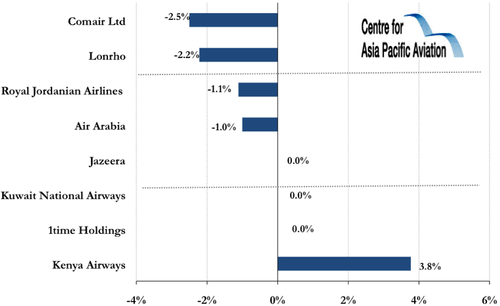