Analysts at JP Morgan stated during trading that despite recent improvements in US airline stock prices and successful capital raisings, the sector still faces considerable long-term challenges. JP Morgan stated, "raising money has long been this sector's forte, and meaningful upheaval seems to have been averted again, with the industry apparently no closer to generating what we consider to be acceptable returns on capital".

JP Morgan added, "call us cruel and heartless, but had capital spigots remained entirely shut during this downturn, we believe the structural upheaval that may have ensued...might have eventually resulted in a more stable, capital-conscious industry capable of generating adequate returns, sometime in the near future."

The analysts also rate these carriers as “overweight”.

Southwest's stock continued to decline ahead of the release of its 3Q2009 financial report. According to Zacks Investment Research, the carrier is expected to post narrow losses for the quarter of USD0.04 a share. The analysts expect non-cash charges in its fuel hedging programme to effect profits, despite improving passenger traffic for the LCC.

Expressjet up on Sep-2009 traffic results 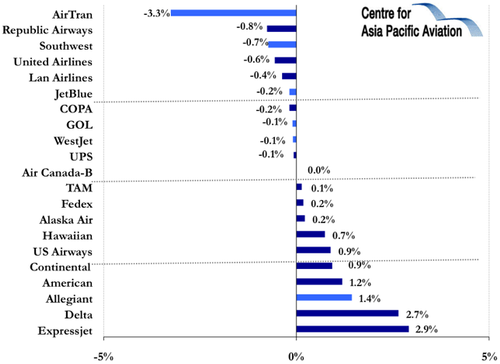