Jetstar and AirAsia today confirmed plans to form a new “world-first” low cost airline alliance, centred on cost reductions and the pooling of expertise that aims to deliver cheaper fares for passengers of both carriers.

Both airline groups will also investigate opportunities for the joint procurement of aircraft, with cooperation also in the areas of airport passenger and ramp handling, maintenance/aircraft parts and passenger disruption arrangement. See related article: Jetstar and AirAsia form cost-based alliance, pressure on Airbus/Boeing for new narrowbodies

Meanwhile, Qantas has canceled its 40-year membership of the Association of Asia Pacific Airlines (AAPA), stating it now plans to develop relationships with other carriers directly, rather than through AAPA, adding its interests now extend beyond those of the association.

Shares of Japan Airlines extended Monday's gains yesterday, on reports that the struggling carrier has obtained approval of more than the required two-thirds of its present workforce and retirees to reduce pension payouts. The carrier's shares ended up 2.3% on the renewed rescue hopes, outpacing a 0.3% gain in the Nikkei 225 Stock Average.

JAL shares soared by nearly a third on Monday, following news over the weekend that the state-owned Development Bank of Japan would double the airline’s credit line to USD2.2 billion. Shares in the airline slumped 68% in 2009, the worst performance in the Nikkei 225 Stock Average.

Also in Japan, Skymark Airlines’ shares were down 6.5%, after reaching a 2009/2010 high on Monday, on expectations that the LCC would expand operations to capitalise on capacity reductions by JAL.

In China, shares in Air China, Hainan Airlines and China Southern gained yesterday, reflecting broader increases in the stock markets in China and Hong Kong, fuelled by a rally in energy and metals companies amid firmer commodities prices (oil closed near USD82/barrel, in its ninth straight day of gains), while banks rebounded on optimism that global recovery would drive profit.

Shares in Shanghai Airlines, China Eastern and Cathay Pacific were down marginally, by 0.1%, 0.4% and 0.6%, respectively. 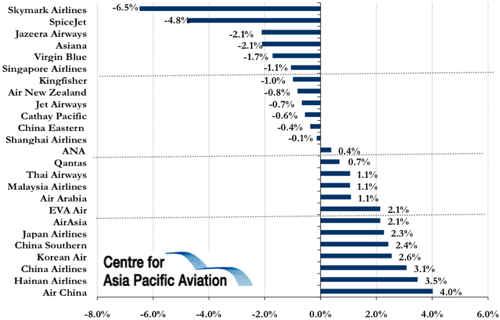