Long gone are the days of double-digit growth in passenger revenue per ASM (PRASM) at JetBlue. Dave Barger and his team have done well since JetBlue's Valentine's Day ice-storm debacle in 2007, but they face an even deeper freeze amid the global economic winter, confronting steep yield declines and falling load factors. Southwest Airlines is experiencing the same nasty combination.

JetBlue's preliminary PRASM last month declined 10% year-on-year, despite a 1.1% decrease in capacity. Load factors also fell, by 1.8 ppts to 77.4%. It is a common experience, which suggests that the deep discounting that is occurring in the market is failing to achieve the kind of loads necessary to tip the airlines back to a position of pricing power. Industry capacity levels will probably need to fall further, unless a major uptick in bookings for the upcoming Summer peak starts to materialise.

JetBlue had some big months in 2008, in terms of PRASM, and would have felt cautiously optimistic amid the US recession. That is until Feb-2009, when the wheels started to fall off. 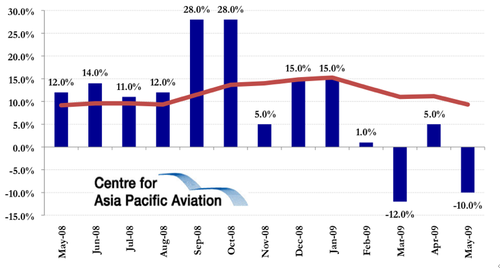 Southwest's unit revenues in a spin

Southwest Airlines has experienced a similar PRASM profile to JetBlue this year, with a weak February, terrible March (absent the Easter boost) a neutral April (bolstered by Easter) and a very soft May, in which it estimates PRASM declined "in the nine percent range as compared to May 2008". 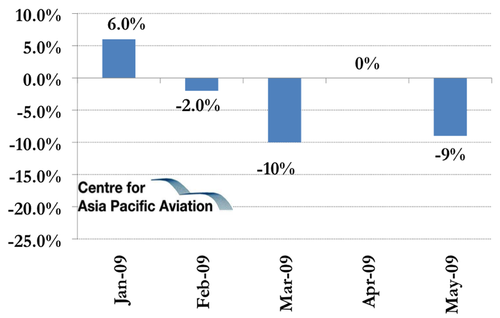 Southwest's load factors are also deteriorating, down 0.3 ppts to 74.6%, as passenger numbers slumped 6.7% to 8.7 million (or slightly under five times as many passengers as JetBlue).

To simply match the first quarter's 2.8% decline, Southwest would need a 16% increase in PRASM this month. That clearly is not going to happen.