JetBlue upgraded by Soleil Securities, UBS not so sure; US Airways and Republic climb

North and South American airline stocks were boosted by the wider market for another day on Friday (23-Jul-2010) as investors remained upbeat on stronger-than-expected financial results for 2Q2010. The Dow (+1.0%) rose on news only seven of 91 European banks were deemed in need of additional capital after stress tests.

JetBlue upgraded by Soleil Securities, UBS not so sure

JetBlue (+0.3%) rose only marginally. Soleil Securities upgraded the carrier’s stock from "hold" to "buy" and raised JetBlue’s price target from USD1 to USD8.

The upgrades were the result of an increase in the analyst’s 2010 earnings per share (EPS) forecast from USD0.32 to USD0.40, after the LCC beat its 2Q2010 forecast by USD0.02. Soleil Securities now also expects JetBlue to report EPS of USD0.60 for 2011, up from its previous forecast of USD0.47. The company stated it has “more confidence” in the carrier’s earnings outlook and its stock “appears attractively valued”.

UBS, meanwhile, maintained a "neutral" rating of JetBlue’s stock, but raised the carrier’s price target from USD6.50 to USD7.00. The analysts stated they “remain on the sidelines” regarding the carrier’s performance – despite an improved outlook and a reasonable valuation – on the view that demand trends are better than domestic trends. 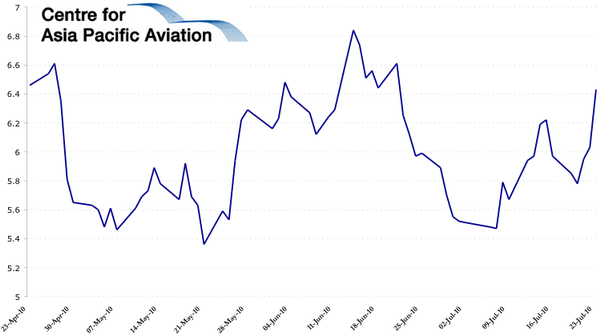 US Airways and Republic climb

Elsewhere, US Airways (+5.1%) was the day’s biggest gainer, continuing to raise following impressive financial results earlier in the week. Republic Airways (+3.2%) also climbed. The carrier last week signed an LoI with Embraer to acquire 24 new E190 aircraft, with the option to convert any aircraft in the order to the larger E195. Deliveries are scheduled to commence in mid 2011, with the first six arriving by the end of the year.

Jazz Air Income Fund (-0.7%) slipped, along with WestJet (-0.3%), LAN Airlines (-0.1%) and Delta Air Lines (-0.1%). Delta announced during trading that it has submitted an application to the US Department of Transportation (DoT) to expand its service between the US and Brazil, which would allow increased flights between its Detroit hub and Sao Paulo. 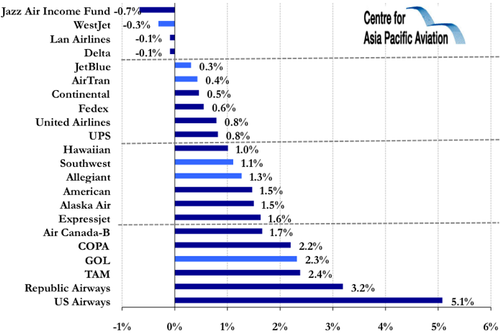