JetBlue Airways stated it would keep its headquarters in New York City, with plans to combine the current Forest Hills and Darien corporate offices, with nearly 1,000 crewmembers and business partners in total, into one main support centre to be located in Long Island City. Subject to execution of a lease with Metropolitan Life Insurance Co (MetLife), JetBlue expects to occupy approximately 200,000 sq ft by mid-2012 in the historic Brewster Building in Long Island City Queens.

JetBlue engaged cities around the country in a more than year-long selection process to determine where to build a central corporate office, narrowing its focus on New York City and Orlando. The latter will remain a significant city in the JetBlue network, with 1,000 crewmembers based in the city.

In an interview with Bloomberg, JetBlue CEO, Dave Barter, stated he was convinced to stay in New York due to its historical links to the city, the cost of relocating most of its staff, access to financial markets and the fact that its international marketing partners, Lufthansa and Aer Lingus operate into New York JFK.

JetBlue was reportedly offered government incentives valued at USD39 million to relocate to Orlando, including tax-exempt bond financing, cash, workforce training and infrastructure development support, according to the Metro Orlando Economic Development Commission. No details were provided on the incentives offered in New York.

Also yesterday, shares in AirTran gained 1.4%. The Air Line Pilots Association for AirTran Airways stated it would take a strike authorisation vote from 19-Apr-2010. The Union added that the action is “not a vote to go on strike, it's a vote to authorise one should that become an inevitability". AirTran pilots have been in contract negotiations with the carrier for approximately six years.

Delta Air Lines and US Airways, on 22-Mar-2010, announced details of agreement involving the transfer of 12% of the slots under a previously announced transaction between the carriers at New York LaGuardia and Washington Reagan National airports to AirTran, Spirit Airlines, JetBlue and WestJet.

Specifically, Delta has concluded agreements with AirTran, Spirit Airlines and WestJet to transfer up to five pairs each of slots at LaGuardia, while US Airways, separately, agreed to transfer five pairs of Reagan National slots to JetBlue, with the new-six way agreement as follows: 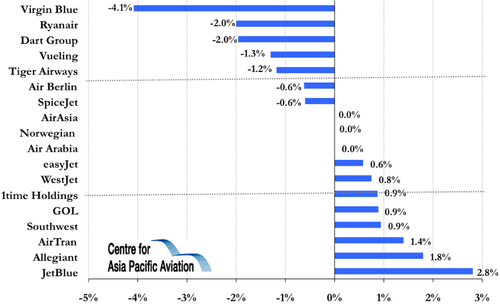