The LCC attributed the revised outlook on weaker close-in bookings than expected during the peak travel periods. Meanwhile, JetBlue expects to be the largest operator at Boston Logan Airport with plans to double its daily departures from 40 in 1Q2007to 80 in 1Q2011 and the destinations served from 19 to 39 as well as the number of gates at the airport from six to 12.

United Continental Holdings (-1.4%) fell despite reporting an estimated 11-12% year-on-year rise in consolidated PRASM for Nov-2010, while mainline PRASM was estimated to be up 12-13% for the month.

Elsewhere, US Airways (+4.0%) shares made the greatest gain for the day, after Standard & Poor's raised its outlook for the carrier to stable, citing improved traffic data and financial results.

WestJet (+1.1%) was also up for the session, after confirming it has signed an interline agreement with British Airways, allowing BA passengers to connect with WestJet’s network. Tickets for the new services will go on sale in 2011. 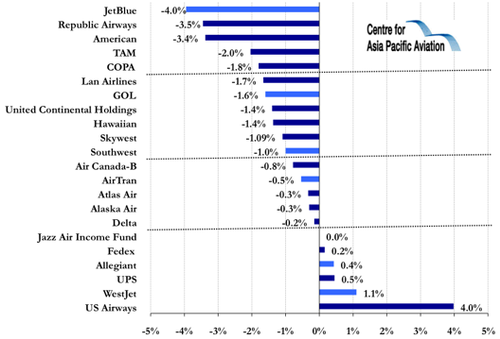