JetBlue (+4.3%) was the biggest gainer of the day, after FTN Equity upgraded the carrier’s stock from ‘Neutral’ to ‘Buy’, due to better than expected passenger traffic and expansion plans on US and Caribbean services. TAM (+1.3%) also gained, following the announcement of a codeshare agreement with Air China, for Sao Paulo-Beijing service.

GOL (-0.4%) fell, despite reporting its second consecutive quarterly net profit, for 2Q2009, due to reduced fuel and maintenance expenses and improved performance of the Brazilian real. The carrier reported a net profit of USD191 million, compared to a loss of USD90 million in 2Q2008, as operating costs fell 26% to USD703.2 million. However, operating revenues fell 4.8% to USD751.8 million, which the carrier attributed to capacity cuts, due to lower demand amid the global financial downturn.

US Airways’ (-5.2%) stocks fell, after it was fined USD70,000 by the DOT for failing to inform passengers of key fare information, such as additional taxes and which carrier would be operating the service. Continental Airlines (-1.5%) and Hawaiian Airlines (steady) were also fined USD75,000 and USD50,000, respectively.

United (-4.4%) also fell as competitor Southwest (+0.5%) eyes off the purchase of Frontier Airlines, which will assist the LCC to compete better with United in Denver. United is currently the largest carrier at Denver International Airport, followed by Frontier and Southwest. 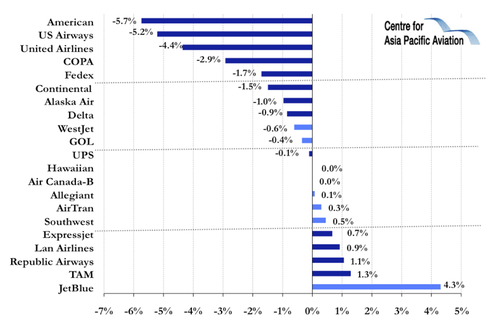