JetBlue profitable in every quarter of 2009; SpiceJet and Virgin Blue in talks with suppliers

JetBlue reported its highest net income since 2003 in 2009, with a net profit of USD58 million (a turnaround from a net loss of USD85 million). But investors are becoming increasingly nervous about cost pressures in the sector. JetBlue’s shares slumped 7.9% yesterday, upon the release of the results.

The carrier’s net profit of USD11 million in 4Q2009 compared to a net loss of USD58 million in the previous corresponding period. With these results, JetBlue reported a profit in each quarter of 2009, with CEO, Dave Barger, commenting that this makes JetBlue “one of only a few US airlines to have done so”.

Looking forward, JetBlue expects unit cost increases to continue to be offset by higher revenue from product and network initiatives. In 4Q2009, JetBlue’s 5.0% yield reduction and 4.0% reduction in PRASM was offset by a 5.2% reduction in CASM, with this expected to continue it 2010, with the LCC expecting PRASM and RASM to increase in the 5-8% range and CASM to increase by 3-5%. Capacity is expected to increase by 5-7% in the full year, with all capacity growth to be driven by its Boston and Caribbean markets.

SpiceJet and Virgin Blue in talks with suppliers; no news on Jetstar’s B787 delivery dates

In the Asia Pacific region, SpiceJet COO, Samyukth Sridharan, has stated the carrier has commenced talks with Boeing and Airbus, regarding plans to order new aircraft, as the carrier is “evaluating the future”. SpiceJet is scheduled to take delivery of the first of five B737-800 orders in Mar-2010, with the remaining due up to Feb-2011. The carrier plans to increase its fleet to 28 from 19 Boeing aircraft at present, ordering four additional aircraft. SpiceJet’s shares gained 2.3% yesterday.

In other fleet news among the LCCs in the region, Virgin Blue (shares up 0.9%) stated it is talks with a number of suppliers, including Embraer and Boeing, to replace some of its 30-50 aircraft that will be coming off leases in the next two to three years. 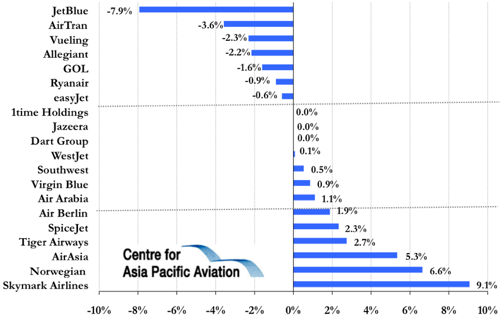