On the heels of Southwest’s expansion into Newark, planned as early as next March, JetBlue will increase daily non-stop service between Newark and Boston, operating four daily flights to Newark's Liberty International Airport, complementing its schedule between Boston and JFK. 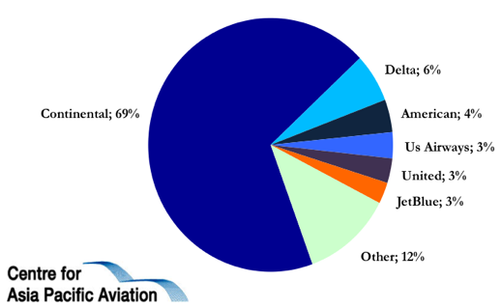 The Dallas-based company has not announced a schedule or the cities it plans to serve but certainly JetBlue is mindful of the potential. It has bracketed the entire New York metropolitan area including White Plains, Stewart, Hartford, Kennedy and Newark from which it serves the Florida markets. Indeed, the Boston service is quite the departure since the vast majority of its New York area service includes Orlando, Tampa, West Palm Beach, Ft Lauderdale and Ft Myers. But, as it pointed out, this move is about bolstering its Boston presence where it is already the largest carrier.

JetBlue said the move brings the only low-fare competition into a “notoriously high-fare market”.

The company noted that during 1Q-2010, the average airfare paid by travellers in the Boston-Newark market was USD280 one-way, a price that is higher than the average fare paid by Boston travellers on any of the six coast-to-coast routes operated by JetBlue from Logan, according to statistics from the US Department of Transportation.

"JetBlue is committed to giving travellers more for less, and that is particularly true for our new route to Newark, which currently has some of the highest airfares in America and no non-stop competition," said Scott Laurence, JetBlue's Vice President of Network Planning. "We're proud to have become Boston's carrier of choice by following one simple formula: offer reasonable fares and don't skimp on the experience, and people will keep coming back for more. It's not rocket science. We're excited to add this new service and give Boston travelers their choice of ten daily flights to the New York City area."

"With JetBlue entering the Newark market, another major destination from Boston will be served by a low cost carrier and that means competition will lower fares and our customers will win," said Massport Director of Aviation Ed Freni.

JetBlue will this fall continue its growth in Boston by adding new non-stop routes to sun spots including Phoenix, in a direct attack on USAirways and Sarasota Bradenton, FL, as well as a new high-frequency route featuring seven daily round-trips to Washington's Reagan National Airport beginning November 1. With the addition of its Newark flights, JetBlue will offer Logan customers 39 non-stop destinations by spring 2011.