IATA has warned that although oil and jet fuel prices have moved “broadly sideways” over the past few months, an expected steady rise increase in fuel costs will be a “significant offset” to any improvement airlines see in terms of improving levels of passenger traffic. Oil prices were up by approximately USD10 per barrel in 3Q2009 over 2Q2009, averaging USD76 per barrel, and have increased USD14 per barrel over 1H2009 averages.

In addition, the crack spread between oil prices and jet fuel prices has dropped from its average 25% to 11% in 3Q2009, due to the persistence of excess refinery capacity. According to Argus Media, profitability on jet fuel refining has shrunk to less than USD9 per barrel, compared to USD28 per barrel at the same time in 2008.

Some regional jet fuel price increases could be forthcoming, particularly in booming markets in the Middle East and China, driven by local demand.

Argus reports that while demand for jet fuel has subsided on a worldwide level, demand in the Middle East has been surging, due to seasonal factors such as Ramadan and increasing demand for air cargo in the region.

Chinese refiners have been adding extra capacity and increasing the proportion of jet fuel they produce, to compensate for higher local demand, driven by domestic passenger growth. Jet fuel output in China increased by more than 10% over 1H2009.

Meanwhile, international standards body, ASTM International, has issued a new specification that fully and unconditionally approves the use of jet fuel containing up to 50% gas-to-liquids (GTL) kerosene for use in civil aviation.

Airbus and Shell immediately welcomed the announcement, with Airbus hailing it as a breakthrough that would eventually pave the way for 100% alternative fuel blends, including those made entirely from bio feedstock. Shell is working with a number of companies, including Qatar Airways, Rolls-Royce and Airbus, on the Pearl GTL project in Qatar, which is eventually expected to produce up to 1 million tonnes of GTL kerosene p/a.

Airbus has already expressed its confidence that 30% of jet fuel used by the aviation industry by 2030 will be sustainable biofuel, provided maturity of alternative feedstocks and GTL technology occurs in the middle of the next decade. Glenn Tilton, CEO of United Airlines, commented this week that commercial airlines are “willing to step up and be the buyers” of alternative fuels, which will act as a hedge against crude prices.

According to Mr Tilton, “volatile increases in fuel costs devastate the industry's bottom line", but the oil price volatility of the past few years has made investors and markets "nervous about committing capital" to the development of alternative fuels. He suggested more government investment is required in the industry, to smooth the development and produce more results, enticing private interests to invest in alternative fuels.

Oil prices dip down towards USD65 per barrel 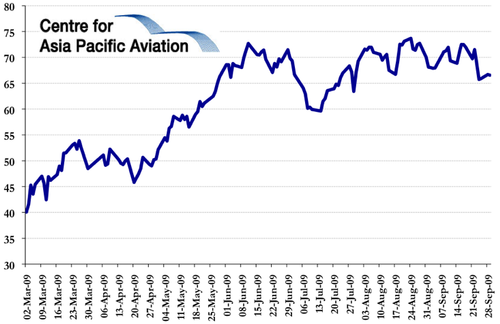 Jet fuel prices also fell notably in the week to 29-Sep-2009. US markets all dropped by more than 5%, with US Gulf Coast prices hitting USD169.88 per litre. Amsterdam-Rotterdam-Antwerp exchange prices dropped 5.7% while Singapore prices down 4.9%, the smallest decline of the week. 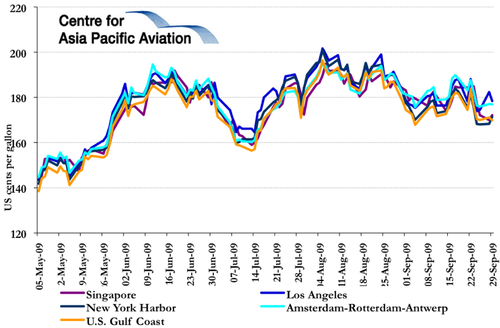